Share All sharing options for: Alabama's Running Back Success Rates vs Ole Miss

As was mentioned yesterday, we're going to start keeping up with the "running back success rate" metric again.  I worked up the Ole Miss game Wednesday night, and I'll start in on the rest of the season to give a game by game and cumulative look at the season so far.  As for the metric itself, it's a pretty simple tool that gives us a measure of how well a running back is doing beyond the "total yards/ypc" numbers that are usually used, since those are heavily affected by big run outliers and aren't necessarily an accurate picture of a back's performance. To come up with these numbers, each individual rush is considered on it's own, and measured by it's "success."  A run is considered successful if it gets 40% of the yardage needed to move the chains on first down, 60% of the yardage needed on second down, and 100% of the yardage needed on either third or fourth down.  So it's pretty simple, but is a much more accurate overall picture of how well a running back does in a game than total yards, since a back can bust off a 90 yard TD run and then never average more than 2 yards a clip the rest of the way and still look like he had a great game.  First up, we have Mr. Glen Coffee: 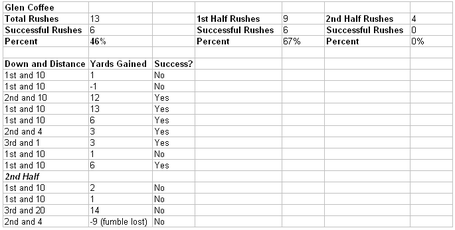 As you can see from the overall numbers, it was not a very successful day for Coffee, getting a very poor 46% rate.  What's most damning though, is that he was having a pretty good day during the first half with 67%, but had ZERO successful rushes in the second.  After his fumble in the fourth quarter, he never carried again, giving way to Mark Ingram: 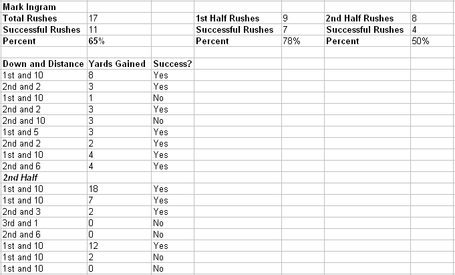 Ingram had a much more successful day, with a 65% rating, but you can see his production dropped off in the second half as well, going from a very good 78% to only 50% after the half.  Some of that is a function of our simply pounding the ball to keep the clock rolling and Ole Miss stacking the line to stop it, but the 3rd and 1 stop was not good, and after he came in in relief of Coffee he only had two successful rushes (the 7 yard run on 1st and 10 and the 12 yard run on 1st and 10), but gained little elsewhere.  Either way, Ingram, at least last week, was the most successful back in the game, and once I get the rest of the season worked up we'll be able to judge even further who is having the better year.