Running Back Success Rates at Tennessee

Share All sharing options for: Running Back Success Rates at Tennessee

Just like we did last week with the Ole Miss numbers, it's time to take a look at the Running Back Success Rates of the three main backs at Tennessee.  To refresh your memories (or if this is the first time you've seen this), each individual rush is considered on it's own, and measured by it's "success."  A run is considered successful if it gets 40% of the yardage needed to move the chains on first down, 60% of the yardage needed on second down, and 100% of the yardage needed on third or fourth down.  This is a much more accurate overall picture of how well a running back does in a game than just the total yardage or ypc averages because it ignores big run outliers that can skew those kinds of stats.  First up, leading rusher Roy Upchurch, who had 86 yards and a TD on 14 carries (6.1 ypc). 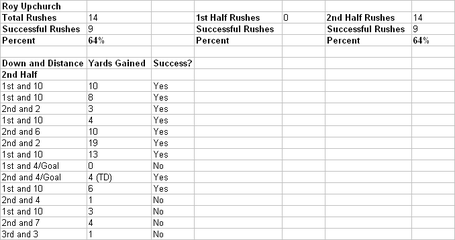 It's a bit misleading to say that Upchurch didn't get a carry in the first half since he was the recipient of a screen pass from the fullback position, but from in pure rushes alone he finished the game with a very solid 64% success rate, all in the second half.  If you discount his final five runs, all of which came near the end of the game when Alabama was content to pound the ball and keep the clock rolling, his number shoots way up to 8 successful rushes out of 9 total for a 89% success rate.  So not only was Upchurch the leading rusher in the game, he was also the most successful, and considering it was all in the second half, where Alabama has struggled to execute properly so far, it's a welcome sight.

On to Glen Coffee, who's come under some heat over the past few weeks in many quarters (jncluding this blog) for his fumble issues.  Coffee finished the day with 78 yards and a TD on 19 carries (4.1 ypc).  Here are his "success rate" numbers: Coffee also had a very solid outing, finishing the game with 58% total and, more importantly for the team's overall success, a 67% rate in the second half.  Also key: no fumbles.

Now to the more surprising and disappointing numbers, Mark Ingram:

With numbers like 4 rushes for 1 yard (0.3 ypc), you really don't need a fancy chart to know that young Ingram didn't do so well in Knoxville, but there it is anyway.  His 0% rate is a far cry from the 65% he posted against Ole Miss, but I suppose he was going to play like a true freshman at some point, and thankfully it was in a game where Upchurch and Coffee were more than capable of carrying the load.