Running Back Success Rates at LSU

Share All sharing options for: Running Back Success Rates at LSU 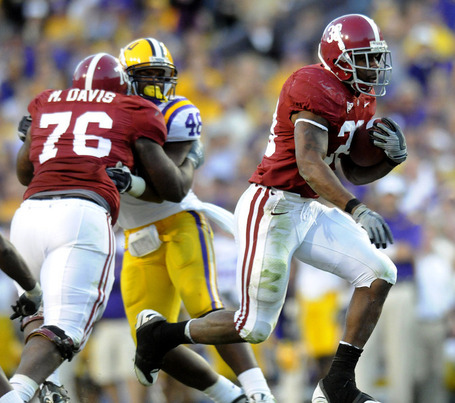 In a game where the previously stout Alabama rushing attack was held to it's lowest total all year (138 yards), it shouldn't shock anyone that the Success Rates aren't that stellar. To refresh your memories (or if this is the first time you've seen this), each individual rush is considered on it's own, and measured by it's "success." A run is considered successful if it gets 40% of the yardage needed to move the chains on first down, 60% of the yardage needed on second down, and 100% of the yardage needed on third or fourth down. This is a much more accurate overall picture of how well a running back does in a game than just the total yardage or ypc averages because it ignores big run outliers that can skew those kinds of stats.  First up is Glen Coffe, the Tide's leading rusher with 126 yards and 1TD on 26 carries (4.8 ypc). 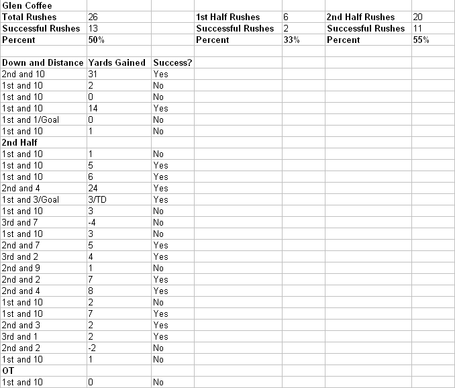 As you can see, Coffee finished up with only a 50% success rate despite the respectable totals (runs of 31 and 24 yards skew those statistics, one more reason this is a handier metric for accurately gauging a running back's success).   More interesting is the fact that only 5 out of his 15 first down rushes were successful (33%), meaning that Alabama routinely found themselves "behind schedule" as far as down and distance go when running on first down.  Next, Mark Ingram, the only other running back to carry the ball on Saturday:

Not a good day for Ingram, who came in sparingly to give Coffee a breather. Clearly Coffee has done enough in the staff's eyes to hold onto his role as primary back: 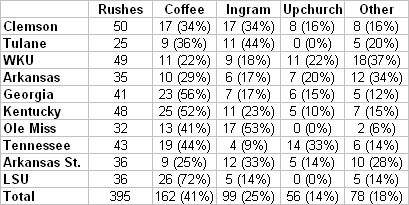 One more curious observation: Whither Upchurch?  After seeing plenty of time in the rotation and even working at FB, Upchurch didn't get a single carry in Baton Rouge or perform on special teams, and spent the second half sans shoulder pads despite his going through warm ups with the team.  Curious indeed.