Share All sharing options for: Running Back Success Rates vs Mississippi State 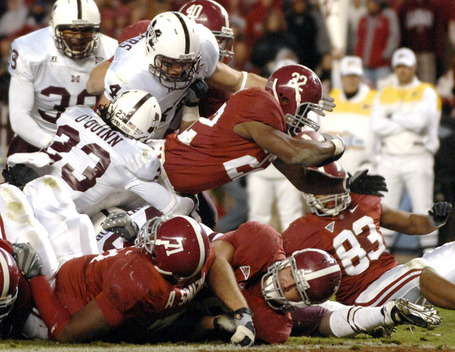 ...Mark Ingram with the sole rushing TD by a running back... 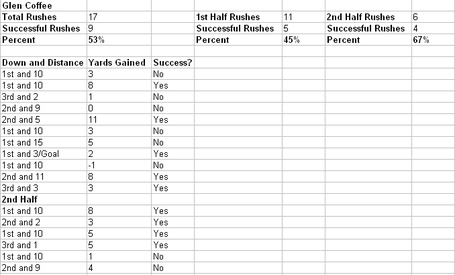 As you can see, Coffee wasn't terribly spectacular in the game with only 71 yards rushing and a mediocre 4.2 ypc.  His success rate wasn't much better, finishing at 53% for the entire game (though he did do much better in the second half with 67%).  Next up, Mark Ingram: 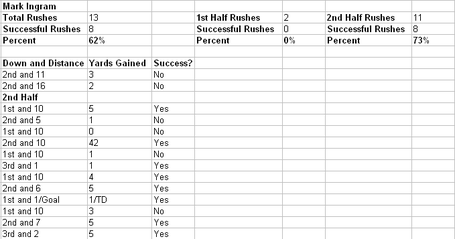 Even though young Ingram didn't do much better than Coffee as far as yardage is concerned, he was the more consistently "successful" back (and finished with a better ypc average as well).  Both Jeramie Griffin and Demtrius Goode got some carries in junk time, and Griffin really stood out:

If you recall from spring practice, Griffin was being used as a short yardage power back out of single back sets like LSU used Jacob Hester last year, and just looking at his numbers (while also keeping in mind it was junk time at the very end of the game), he looks like the kind of runner that Saban and the staff covet.  Keep an eye out for him in the future. 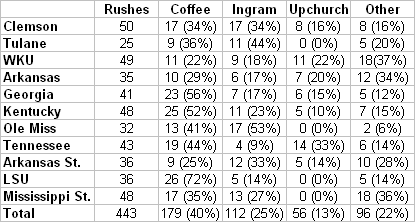 Now that Coffee has figured out how to keep the ball secure, it doesn't look like there's much danger of Ingram or anyone else taking over his spot as the featured back in the offense.  Also of note is a second straight week without a carry for Roy Upchurch, who has been sufferening from neck and back spasms since just before the LSU kickoff.  Here's hoping he'll be back and ready for the Iron Bowl.