Share All sharing options for: The RBR/TMZ Frat House Radio Gay-o-rama* is Upon Us!

Tonight's topic of discussion: Kodi Burns and Sen'Derrick Marks showed up at practice in the same dress! Who wore it better? YOU DECIDE! 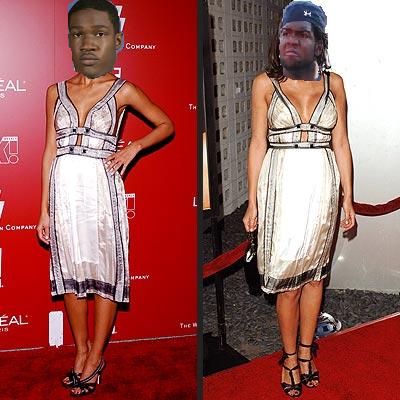 We'll also have Auburn blogger Jerry Hinnen on board to talk about who the coaches will be wearing before, during, and after the game, and all the scandalous gossip that's fit to deny! 8pm CST is the time, NowLive is the place! Join us, won't you?!

UPDATE: After the weeks of technical ordeals with NowLive, we moved over to TalkShoe midshow, who very kindly provides this nice little embed code, or, as always, you can just download the mp3.

Warning, the start is a lot of "uh...is anyone on here?", and the part after Jerry is very disjointed since OTS and I were exceedingly flustered over all the craziness. NowLive can now officially kiss our collective bathing suit region, and next week TalkShoe is the place to be, where hopefully we'll have some sort of semblance of order. Big thanks to Jerry, who did an absolutely amazing job breaking down Auburn for us.

* The title of this post and the post itself are a complete and total parody of the snide remarks of a rival fan. Do not be offended by them. If you are, lighten up, Francis.