Share All sharing options for: Running Back Success Rates against Arkansas State 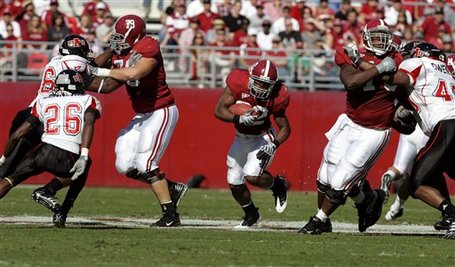 Mark Ingram, ladies and gentlemen, give him a hand!

Time to look at the Running Back Success Rates of the three primary backs from this weekend, Mark Ingram, Glen Coffee, and Roy Upchurch. To refresh your memories (or if this is the first time you've seen this), each individual rush is considered on it's own, and measured by it's "success." A run is considered successful if it gets 40% of the yardage needed to move the chains on first down, 60% of the yardage needed on second down, and 100% of the yardage needed on third or fourth down. This is a much more accurate overall picture of how well a running back does in a game than just the total yardage or ypc averages because it ignores big run outliers that can skew those kinds of stats. First up is leading rusher Mark Ingram, who carried 12 times for 113 yards (9.4 ypc) and 2 TDs:

Ingram finished the game as the primary back in relief of Glen Coffee, who started the game and had the most early carries before suffering a bruised bicep in the first half that caused the medical staff to hold him out the rest of the game.  As you can tell from the numbers Ingram filled in quite capably, finishing with a very good 9 of 12 tally for a 75% success rate overall (and in both halfs, so consistency what!), a far cry from the 0% showing in Knoxville.  Next up, the aforementioned Mr. Coffee:

Considering a stat line that reads "9 rushes for 56 yards (6.2 ypc) and 1 TD" is pretty good for a guy splitting time with two other backs, Coffee didn't have that good of a game as far as success rates go.  He finished at 56% before being pulled after the bicep bruise, and it was actually a step back from his 58% performance against UT.  He had some success in the early goings and seemed to hit his stride after the TD run, but considering he was out after only 9 carries and early in the second quarter it's hard to say how well he may or may not have done with more carries to average out.  Finally, the hero of last week's win, Mr. Roy Upchurch:

Like Coffee, Upchurch's numbers (5 carries for 31 yards (6.2ypc) and a TD) sound good for a back that's splitting time, but the big 22 yard TD run inflates those numbers, as Upchurch finished with a 60% overall rating and a 50% rating in the second half, where four of his five carries took place.  Even more damning is the fact that the two unsuccessful carries were for no gain and a loss.  As someone mentioned last week, though, thankfully we have three guys who can carry the load  and when one is struggling, there's another that can step in for a change of pace.  I also forgot to post the carry percentages with last week's post, so here is the current stats with both UT and Arkansas St. factored in:

Coffee is still clearly the leader with 38% of the carries so far, though Ingram's time on Saturday has helped him close the gap, and the fact that he came in as the primary back after Coffee's injury instead of Upchurch even after his struggles and Upchurch's heroics in Knoxville should tell us that Ingram is the guy the coaches trust the most after Coffee.