The Crimson and White Roundtable...

Share All sharing options for: The Crimson and White Roundtable...

This week's roundtable is hosted by the one and only gerry dorsey, so away we go:

1) what are your feelings on alabama's current position in the polls? are they overrated? underrated? just right?

I can't disagree with a #1 rating.  Others may argue that Florida Texas Tech has the better resume, or that Tech AND Penn State have better resumes (but then again, they hate us, so clouded judgement and such, and they make good points.  Penn State ran roughshod over all takers but tOSU, and Florida is piling up points and yardage at a ridiculous clip, while Alabama's "best wins" are over a Clemson team that turned out to suck and a Georgia team that isn't the elite national contender everyone thought they were in the preseason, while also "struggling" against the likes of Kentucky and Tulane.  But you know what?  Penn State's schedule is creamy soft and their quality win over tOSU had more to do with a true freshman's fumble setting up their sole TD drive of the game (on the tOSU 38, no less, and then they were also nice enough to commit a 15 yard penalty one play later to help them along to the 14 yard line) than their own previously imposing offense's ability to move the ball, and Florida's hubris cost them a game they dominated in all aspects besides turnover margin.  So even if Alabama isn't as "flashy" as those two, at least we aren't making boneheaded mistakes to throw games away and bragging about piling up points on bad teams.  We're efficient on offense, brutal on defense, and it doesn't matter who lines up across from us, we're going to play physical football and make you beat us.  So far nobody has been able to man up enough to stop us, and none of those other teams have shown me anything to think they are man enough either, so that makes us #1. Deal with it.

I don't know, with a team like Arkansas State (which, I'm not trying to talk badly about them because they are a pretty good team) we were supposed to control the game, so it's hard to say I was surprised by any aspect of the game.  So celebrity sideline candy, maybe? 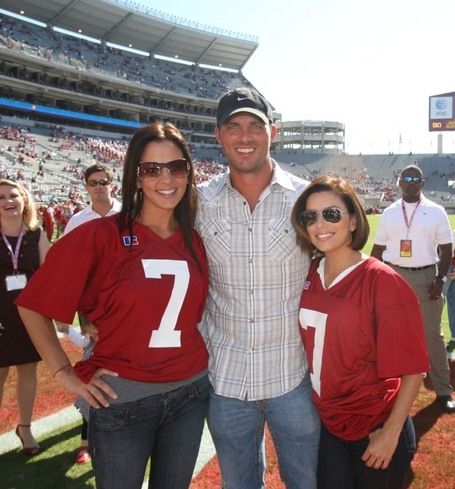 As far as what we didn't do so well at, the passing game.  Wilson is kind of Jekyll and Hyde again this year (though not to the horrible game losing extreme that he was last year), and Hyde always seems to appear at home against "lesser" opponents (and by lesser I mean games that everyone expects us to win handily).  He was 15 of 28 (53.6%) for a meager 152 yards and an INT that killed a promising scoring drive, and just generally didn't look that great.  I know we were opening up the passing game some in preparation for LSU and were using this really like a scrimmage to get stuff in live game action, so some of that was probably part of it, but it's still tough to see us struggle in any aspect on offense when there's so little room for error with this kind of game plan.

3) name your player of the game on offense. also name one on defense.

Offense has to be Ingram.  He bounced back from a pretty bad day in Knoxville to really carry the team on his back after Coffee's bicep injury.  12 rushes for 113 yards (9.4 ypc!) and 2 TDs is a far cry from 4 carries for 1 yard, and it was great to see him come back from such a disappointing performance and do work like that.  Also, and maybe this is just me, it looked like he was back to the downhill runner form we saw against Clemson instead of the "dance a little and then try to break it outside" guy we've seen a little over the last few weeks (especially against UK).  Like I said, maybe that's just my poor recollections but it seems like he's really turned a corner and is ready to play a big role again.

On defense, I'm going with both Deaderick and Greenwood.  The play of the DEs this year is really amazing (no doubt because we finally have size in the middle that's freeing them up), and both of those guys were in the backfield causing havoc all day long.  Each had 1.5 sacks, but more than that they were folding the pocket on just about every play even if they weren't getting to the QB. 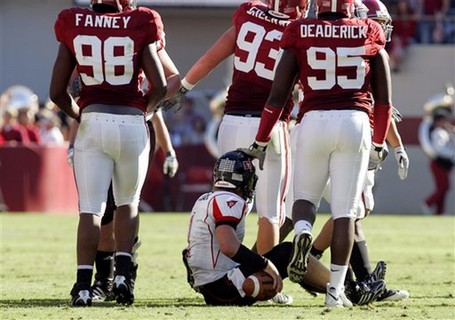 4) as we found out yesterday, with november comes the coaching carousel. what are your thoughts on phat phil and his legacy?? which realistic candidate, if any, scares the crap out of you??

Just being objective, the UT fanbase should be very appreciative of what Fulmer did for their program.  I know we hate him, and with good cause, but they have every reason to love him for what he did to bring the program back into the national spotlight, and also every reason to be glad to see him gone since he's clearly no longer the man to maintain that kind of consistency.  As far as who will replace him goes, the guy that scares me most is Mike Leach.  I don't think he'd leave Texas Tech for UT; he's just too good a fit for Lubbock and I doubt there's anywhere else that would really indulge a character like that as much as Texas Tech does.  But at the same time, he hasn't been shy about interest in other jobs in the past, and he may want a shot at bringing his offense to the SEC.  I personally don't want that to happen because then I'd have to stop liking him, and also we'd have to start playing him every year, and I just do not like that idea one bit.

5) with all the hype of fowler, corso, and herbie in town, the #1 ranking, the unbridled (and unnecessary) hatred for saban (and most anything crimson tide for that matter) from the tigah faithful, just how ripe for for the upset is bama this weekend?? how do you expect the squad to react??

We're as ripe for an upset as we are just about every week.  We've talked about this before; the offense works with efficiency and minimizing mistakes while letting the defense keep us out of too much trouble, and the margin of error is very small for the Tide.  Even though we should be able to come out of Baton Rouge with a win, there's always the possiblity that something will happen to finally cause that fatal error that we've been able to avoid so far, be it an injury (McCoy out for one week, Cody out for two weeks, and Smitty and Davis out for a week a piece means we've really only lost five starts this entire season, a tremendous statistic), an untimely turnover, too many blown coverages/missed tackles, or whatever.  We really do have to go out and "win every play," as Saban puts it, because we are not a team that can make a bunch of mistakes and then still overcome them with big plays from the skill guys.  It's made this season very unnerving, honestly, but it's also a testament to how carefully each gameplan is prepared and how well the team is coached that they can go out and play so fundamentally sound, with such discipline, and with the attitude that no matter what is going on each play is the most important one and everyone has to execute their assignment...it's really just amazing thinking about the difference in this year's model and last year's.  And that's why I think they'll react like they have to every other "big" game; calm and collected and ready to go out and execute.  They didn't let the hype surrounding the Clemson or Georgia games get them, and they certainly won't let this one either.