Alabama/LSU Q & A with Richard Pittman

Share All sharing options for: Alabama/LSU Q & A with Richard Pittman

I'm sure you're all aware of the stellar work going on over at And the Valley Shook by now, but if you aren't, the following Q&A should turn you on to it.  Richard Pittman is the LSU fan we like (and tolerate!), mostly because he has awesome taste in movies, and he was kind enough to answer some questions for us regarding this weekend's game.  I put down a few for him as well, so be sure to check in with ATVS to see those.  On to the questions:

1. LSU's talent level didn't drop appreciably in any particular position on defense, yet their  performance has been relatively lackluster so far this year.  What's the biggest reason, at least in your mind, why this has happened?

I addressed this briefly in a previous post, but first, I do want to say that I think the talent has dropped off appreciably in a couple of areas.  I think that we are not as good at safety with Craig Steltz out and Harry Coleman in.  Steltz was not perfect, but he had great ball skills.  He was a playmaker.  Coleman just doesn't bring that.  Coleman likes to hit, but he's not the safety that Steltz was.  Also, at linebacker, the loss of Ali Highsmith has been felt heavily.  We have Kelvin Sheppard in HIghsmith's place and that has been a net downgrade.

But beyond that, I think a few players from the 2007 team aren't playing as well as they did last year.  Let's start with Darry Beckwith, our all-conference linebacker.  He has been playing hurt, but I think he's also lost a step.  He's just not as quick to the ball or as aggressive.  One telling play was when Knowshon Moreno ran for a 68 yard touchdown.  Moreno's a power back, and does not have great speed, plus you give up speed when you're carrying the ball.  When Moreno got to the second level, Beckwith was chasing him from behind.  Instead of catching Moreno, Moreno actually pulled away from Beckwith.  A slow running back was faster than Beckwith while carrying the ball.  Beckwith may still be feeling the effects of a groin injury, but that's just bad.

Let's move on to my dear cousin, Kirston Pittman.  Last year, he was a monster, good against both the run and the pass.  He was dominant against the run, and a good pass rusher as well.  This year, his pass rush has disappeared.  When we're in our base defense, with 2 DTs and Jackson and PIttman on the ends, we have very little pass rush.  It improves when we sub Rahim Alem for Pittman, as Alem is our best pass rusher.  We don't REALLY start rushing the passer until we bring in a special pass-rushing unit that we would only bring in on 3rd and long.  Of course, we didn't rush the passer all that well last year either, but this year it's been abysmal in our base defense.  With our struggles rushing the passer, our pass defense has struggled as well.

I could name a couple more as well, but Pittman and Beckwith are the two guys who stand out as not playing as well now as they did last year.

2. Continuing with the defense the biggest issues have been against the pass, while Alabama has been competent at best throwing and leaning very heavily on the running game.  Does the Tide have a chance to burn LSU deep early and often, or is the secondary capable of handling our meager aerial assault?

Thanks to a certain almost-three-foot-tall person, I don't know as much about Bama as I did last year.   I will answer the question with a question.  A couple, actually.  Do you have a speed-burner wide receiver who has been a consistent deep threat?  If so, he will probably burn us.  Do you have an experienced and heady receiver who has sure hands and the ability to find holes in zones, particularly over the middle in matchups against linebackers and safeties?  If so, he will probably burn us as well.

Then again, we were able to shut down South Carolina's passing game in the 2nd half.  It's not like we're utterly incompetent.  There does come a point where, if your offense is bad enough, we will shut it down.  Of course, we did that by rushing the passer effectively, which South Carolina allowed us to do by completely abandoning the run.  Plus, you know, their offensive line is terrible.  If you keep John Parker Wilson upright, you should be able to pass effectively.

3. On offense, Andrew Hatch is out and Jarrett Lee isn't Jamarcus Russell (or Matt Flynn or Ryan Perriloux for that matter).  How has LSU compensated for the inexperience under center, and how do you see them attacking the Alabama defense?

Jarrett Lee is certainly no Jamarcus Russell, but he's probably as good as Matt Flynn and Matt Mauck.  He's just a lot younger than those guys were when they took over.  He's been productive, averaging 7.55 yards per pass attempt, which is about 0.6 yards per attempt better than John Parker Wilson.  His problems have been a) that he's not mobile, and b) he's thrown too many interceptions.  If you cut the interceptions out of his game, he's been outstanding.  But then again, you can't just ignore the interceptions.  And really, the biggest problem has been that 5 of his 10 interceptions have been returned for touchdowns (a stat that is really hard to explain), and one was returned to inside the 10 yard line, and a couple of those were at really bad times in big games.

But let's not forget that we would not have beaten Auburn if Lee hadn't come in and played lights-out.

The question is, however, how have we compensated.  We really haven't.  We've allowed Lee to press on, striving for a balanced offensive attack.  Strangely, we don't really give him a lot of short throws.  He's really better at the intermediate routes anyway.  We often stay in and max protect, which helps him.  We also have that really good tight end, which gives him a nice outlet to throw to a lot.  But really Lee is a guy who, if he makes it, is going to make it as a deep thrower.

We've been very effective running the ball, and that has helped.  I think you may see more running of the football in this game, as last week's game against Tulane was Lee's worst as a QB.  I'm afraid his confidence may be down.  We've been successful with power running, and I don't expect us to stop doing that this week, but I expect us to try to get to the outside with Holliday a lot more this game than we have in the past.

4. Against Ole Miss and Tennessee, when the running game was struggling, Alabama took to the air and had some relatively good results, while against everyone else we've pounded the ball relentlessly while struggling to do much with the passing game.  Which scenario do you see as more likely on Saturday?

Hmm..  good question.  It's hard to say.  The only team that was really able to use power running against us effectively was Georgia, and they did it by mixing in runs and passes.  If we're allowed to sit in our base defense, and let you run right at us, it probably plays into our strengths.  We're not very fast right now, but we are big and we will hit.  Your best bet, I think, is play-action passes on 1st down.  I think good running teams, if they are also competent at the pass, can do that on us all day.  Our safeties and linebackers aren't very good in coverage.  Our corners have actually been decent most of the time, but our linebackers and safeties have been horrid.

So I think the most likely route for success is to open up the gameplan and pass a little, while selling the run.

5. Death Valley at night is one of the most intimidating places to play in all of college football, but CBS took first pick for this weekend's game and has forced LSU to welcome Saban back to Baton Rouge in the early afternoon.  How do you think that will affect the atmosphere/team/crowd/etc.?

It's hard to gauge the LSU fan base right now.  I think we're very anxious.  We didn't play much of a game against Tulane, and the crowd booed Lee's interception (which was returned for a touchdowns of course).  I think the crowd will be pumped, and will be loud, but it was also be fragile.  If Bama can have success against us early, it will take the crowd out of the game entirely.  I don't think that has much to do with the start time.  I think it has more to do with the psyche of the fan base right now.

One of the strange things is that, because of Bama's success and our failure to play up to competition in big games, this one seems to have a lot less to do with Saban returning and a lot more to do with just trying to get the win.  We're anxious about the outcome, but I am not (right now) feeling the anxiety about the Return of the Saban.

6. Who on the Alabama offense scares you the most relative to how they match up against LSU's defense?

I don't know your receivers really well, but I'm going to go with Nick Walker.  We've had a lot of trouble covering the middle of the field, and tight ends have eaten us alive.  Also, if you get into 3- and 4-wide receiver sets, you should put your best wideout in the slot.  We'll be helpless.

7. Likewise, who on the Alabama defense are you afraid will have a banner day against the LSU offense?

I'm afraid that either Javier Arenas or Rolando McClain will return an interception for a touchdown.  I'm also afraid that Terrance Cody will stuff our power running game early.  If so, there's trouble.

8. I'll see your Sandman and raise you a Cerebus:  Did you ever read it, and if so, did you stick with it even during Sim's addled ramblings on feminism and the Jewish faith towards the end?

Sorry, I never read Cerebus.  It's just not one of the ones I've gotten around to.  Not that I wouldn't read it, but the opportunity has never quite presented itself. 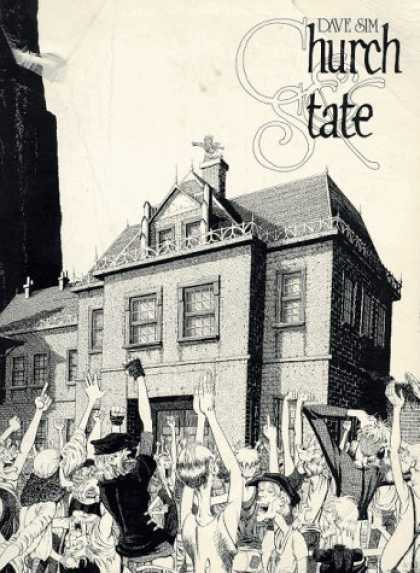 ...most holy is displeased by your answer...