Share All sharing options for: Running Back Success Rates Against Florida (SECCG)

To refresh your memories (or if this is the first time you've seen this), each individual rush is considered on it's own, and measured by it's "success." A run is considered successful if it gets 40% of the yardage needed to move the chains on first down, 60% of the yardage needed on second down, and 100% of the yardage needed on third or fourth down. This is a much more accurate overall picture of how well a running back does in a game than just the total yardage or ypc averages because it ignores big run outliers that can skew those kinds of stats.  Only two backs carried the ball in the 20-31 loss, and the numbers actually paint a pretty good picture of why we fell in Atlanta.  First up, leading rusher Glen Coffee: 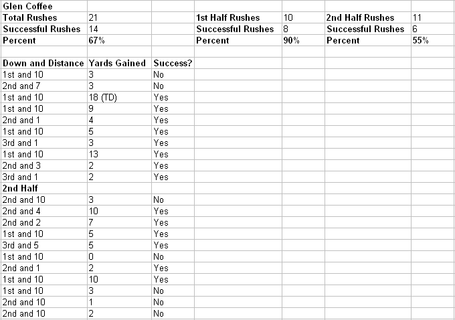 Overall Coffee remained pretty steady in his familiar mid-60% range, but looking at the halves we see that he had a stellar 80% rate in the early goings before falling off to 55% in the second half.  Contrasting that, though, is Mark Ingram:

Ingram, who didn't have a single successful rush in the first half, suddenly found his feet in the second with a 100% success rate that included a 3rd down conversion and a TD run.  All of those runs came on a single drive in the third quarter, though, and began at the UF 15 after the four straight successful runs by Coffee helped engineer a lengthy drive that started at the Alabama 9.  He never carried again, and Coffee's last few successful rushes helped set up the final FG, but he didn't have any more successful rushes in the game, which certainly didn't help the Tide offense and it's inability to stay on the field in the fourth quarter.