Share All sharing options for: Meet The NCAA Football 2009 Coverboy...

It has been officially announced now that the cover boy for NCAA Football 2009 is none other than Darren McFadden. It has been reported on a variety of sites, but here is one link to a news station in Arkansas that you can read. McFadden will appear on the cover for all platforms of the game, except for the Wii -- which is unbelievably awesome, FYI -- which will feature a mascot that will be determined by a fan vote. All things considered, I don't suppose that it should be a major shock that McFadden made the cover, but nevertheless it is now official.

One gaming blog also reported the story, and posted the following photo of the cover. I'm not sure if it will be the finalized one, but it looks plausible enough. 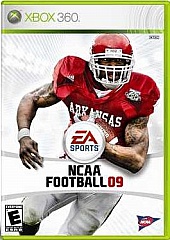 Either way, this isn't necessarily 'Bama-related, but I'm sure we have a few diehard gamers in our readership base and thus it's fitting, especially for a slow Sunday. Plus it gives me another excuse to post about McFadden, for whom I have a very well publicized man-crush.