I Wanna SEC You Up: A Cursory Glance at the South Carolina Gamecocks

Share All sharing options for: I Wanna SEC You Up: A Cursory Glance at the South Carolina Gamecocks

Hindsight
games in grey are where I picked wrong
Last year I was pretty high on South Carolina, picking them to finish the regular season at 9-3 with an outside shot at Atlanta. The season started promisingly enough with a 6-1 record going into week eight, but the wheels fell off against Vandy and the 'Cocks dropped their last five to knock them out of a guaranteed bowl bid (Thanks!). Of those last five, Tennessee and Clemson were both narrow losses; UT prevailed in OT despite being thoroughly dominated the entire game (SC outgained them 501-317) and Clemson survived a rally by the 'Cocks that took them from down 17-7 to up 21-20 with nine left on the clock, but a 35 yard field goal as time expired gave Clemson a win over their hated rivals and ended the season on an extremely sour note for the OBC. I said of that game:

Clemson typically starts strong but falls apart at the end of the season, and I imagine the next few years will be positive ones for Gamecock fans.

Boy was I wrong. I was also pretty wrong about Arkansas ("After the offseason Arkansas has had, I'm expecting a meltdown of DuBosian proportions.") and the Gators ("Florida has to rebuild it's boa constrictor D that saved it from an upset last season, and I think the OBC gets another one over his alma mater.") as well, teams that horeswhipped a stout Gamecock defense mercilessly in their victories. So what went wrong? Most of my predictions were based off the idea that the SC defense would be much stouter than in the first two years under Spurrier and the offense would be as effective (if not more) as the '06 model. My predictions for the improved defense came through early in the season, especially against the pass where the 'Cocks finished first in the league, but the injury fueled collapse at the end of the year coupled with a frustratingly ineffective offense helmed by too many QBs robbed the Gamecocks of the season they could have had. Oh well, on to 2008.

The Blake Mitchell show is over, having graduated after an up and down career where he started parts of the past three seasons but never managed to lock down the starting job with consistent performances. Lovable ne'er-do-well Stephen Garcia appeared to be the QB of the future for Spurrier, but his numerous run ins with the law have him suspended 'til mid-August, leaving Chris Smelley, a part time starter last season (six games), and Tommy Beecher, a mobile junior that equaled (if not outplayed) the more experienced Smelley enough during the spring to keep his name in contention for the start. Smelley also underwent surgery during the offseason, exasperating his already questionable arm strength, and will need a hell of a fall to lock down the QB position.

Settling on a QB isn't the only issue facing the SC offense, though, with the need for improved offensive line play and a Cory Boyd shaped hole to fill in the backfield. Last year's offensive line gave up 31 sacks last season, 11th worst in the conference (UK gave up 38), and opened the way for a miserable 3.6 ypc (113.7 ypg) on the ground. Four of five starters return this year, with only center Garrett Anderson, who actually started four games last season at guard, new to their positions. At LT, Jamon Meredith is expected to be the anchor of the line, though he'll be forced to sit the first two games to restore a lost redshirt season. I have no clue how that works, but forget it Jake, it's the NCAA. The SR started all 12 last year, and he'll by backed up by Hutch Eckerson, a sophomore who had five starts as a true freshman before redshirting last year. Eckerson will hold down the LT spot while Meredith sits the first two games. On the other end at RT, SR Justin Sorenson has 18 straight starts at the position and, along with Meredith, provides the most experience on the line. Heath Batchelor and Seaver Brown, two sophomores, hold down the guard spots after starting three and six games last year, respectively. They have quality depth behind them in Lemuel Jeanpierre, who had five starts at RG last season, and Kevin Young, a talented SO that had the LG spot locked down last year before a preseason injury kept him off the field in '07. Having some quality game time and starting experience among the linemen, finally, means the 'Cocks should at least have a solid line to help the young backfield develop.

Whoever winds up under center will have at least one good target to throw to in Kenny McKinley, the SEC's leader in receptions (77) last year. Finding someone to step up and provide a few more receiving threats is a must, though, and SC has a couple of candidates in Moe Brown and Dion Lecorn. Lecorn, a sophomore, saw six starts last year as a true freshman, grabbing 27 for 315 yards and 3 TDS, while Brown, who saw five starts two years ago, had 13 catches for 168 yards. WR Depth is there, though it's wholly inexperienced, so the TEs could be counted on as receiving threats to help spread the ball around. Jared Cook (the second leading receiver last year with 30 for 421 and 3 TDs) and Weslye Saunders are both good pass catching TEs and can pose some interesting threats from two tight sets for opposing defense.

If the 'Cocks are going to improve on a terrible defensive performance down the stretch last year, stopping the run is the first order of business. The 'Cocks finished dead last in the conference last year in rushing defense, giving up 209.3 yards per game (the only team to give up more than 200 ypg). Those numbers were no doubt aided by the two game Arkansas/Florida stretch that saw the Hogs and Gators combine for 1,188 yards of offense and 99 points, and it cost former DC Tyrone Nix his job. New DC Ellis Johnson, the man behind the sudden resurgence of the Mississippi State defense last season, has a lot of talent returning this year, and should be more than capable of working the same sort of magic in Columbia. MLB Jasper Brinkley, a 1st team All-SEC selection in '06 that only saw four games last season due to injuries, will immediately help out in run defense, and Eric Norwood, a DE that started all 12 last year that has made the move to OLB, will also give the 'Cock linebacking corps a much needed physical presence on the strong side. Rodeny Paulk also returns at the weakside, where he started all 12 last year and recorded 64 tkls, fourth best on the team. 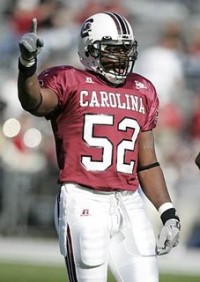 Dear Jasper Brinkley,
Please be awesome again.
Love,
The South Carolina Fanbase
Up front, Jordin Lindsey returns after being declared ineligible last year. The SR started six games in '06 at DE before redshirting last year, and he's joined on the other side of the line by Cliff Matthews, who actually switched positions with Norwood after starting in nine games at stong side linebacker last year. The tackle spots are also secure, with Marque Hall, a SR who suffered an ACL injury in '06 after only two starts, but returned to start last year, and Ladi Ajiboye, who started 10 games last year as a true freshman and earned a spot on the SEC freshman team, returning. They have quality depth as well. JR Nathan Pepper started 12 in '06 and 3 last year before being injured, and Kenrick Ellis, a sophomore, had one start last year while recording 11 tkls (3 for a loss). If the front seven can stay healthy, they should be more than able to help out the beleagured secondary and restore some sense of respectability to the SC run defense.

Conversely, SC fans shouldn't be too concerned with their secondary going into the 2008 season. The 'Cocks were tops in the league in pass defense, allowing only 168.6 yards per game and placing CB Captain Munnerlyn on the 1st team All-SEC list. Munnerlyn and SS Emanuel Cook led the team in picks with 3, and also combined for 9 pass break ups, while Cook led the team in tackles with 92. The rest of the secondary is intact as well. Opposite Munnerlyn is corner Carlos Thomas, who started seven games last year as well as 10 in '06 after moving over from wide receiver. He was second on the team in pass breakups last year with 6. Darian Stewart, the JR free safety who led the team in pbus with 7 and had two picks as well, also returns. If these guys were able to shut down the pass without any consistent pass rush help from the front seven last year, then it's a pretty sure bet that an improved d-line and linebacking corps means they'll be just as effective, if not more so, this season.

At a glance, there are really only two gimme wins that stick out here, D-1AA's Wofford and the UAB Blazers (our day will come, people, our day will come!), while there are plenty of games that the 'Cocks should handle easily if they can play some defense and keep the offense humming. An opener against NC State is a likely win, as the Wolfpack is woefully inexperienced despite reeling off four straight to finish last season, while Arkansas, Vandy, and Kentucky are also undermanned and inexperienced as well. That's six wins right there, enough to accept a bowl bid if one comes calling but no guarantee that one will. The rest of the schedule is a little tougher, but they get Georgia, LSU, and UT at home before ending the season on a two game road swing against Florida and Clemson. Best case out of that bunch is a win over UT, who will be breaking in a new QB and OC, an upset of either UGA, whom they upset last season and who could get caught looking ahead to Arizona State, or LSU, who lost a lot of personnel from last year's squad and is likely doomed to the 9-3ish post MNC year, and a revenge win against Clemson. That puts them at 9-3 with an outside shot at representing the East in the SECCG if forerunners UGA and UF falter enough. Worst case? UGA and LSU are every bit as good as we think they are and handle their business with ease, UT has worked the kinks out of their new offense by week ten, and Clemson handles them at Clemson with a squad that lives up to all of it's preseason buzz. The actual case, as usual, is probably somewhere between, with the 'Cocks landing somewhere in the neighborhood of 7 or 8 wins.