I Wanna SEC You Up: A Cursory Glance at the Vanderbilt Commodores

Share All sharing options for: I Wanna SEC You Up: A Cursory Glance at the Vanderbilt Commodores

Yeah, I know I said the team previews would start yesterday. Take it up with Charter, the great bane of my existance. I hate you Charter. I hate you so.

Last year I took some heat for thinking both Vanderbilt and Mississippi State would reach bowl eligibility, and was at least right on State while also tantalizingly close with Vandy. The Commies hit their seemingly self imposed five win ceiling once again, dropping heartbreaking one score games to Georgia, Kentucky, and Tennessee.

games highlighted in grey were games I picked wrong

My predicted final record was a meager 6-6, good enough for bowl eligibility but, as we found out the hard way (and SC found out the harder way), not good enough to secure a bowl bid. Vandy didn't have to worry about it, though, since they wound up at 5-7, dropping the swing game against Tennessee in thoroughly heartbreaking fashion. My comments on that game in last year's preview:

"Vandy returns to the site of their last best win, the 2005 upset that kept UT from becoming bowl eligible and was the first Vandy victory over UT since 1982. UT put things back together last year, but a questionable secondary makes me think Earl Bennett could have another banner day on Rocky Top. If this is the win that gets Vandy bowl eligible, then it will be extra sweet for the 'Dores, so I'll call this one Vandy."

Bennett finished with only two catches for 26 yards, but Vandy still ran roughshod over the Vols for most of the game until a rally by the Vols brought them back from a 24-9 deficit midway through the third quarter. Their last gasp at bowl eligibility against Wake was shut down immediately as the Demon Deacons forced five turnovers in what turned out to be a 31-17 route and one of the worst performances of the season for the Commies. Sadly, last year's model was probably the best one Bobby Johnson has fielded in his tenure in Nashville, and hard times should likely raise its head again this season. 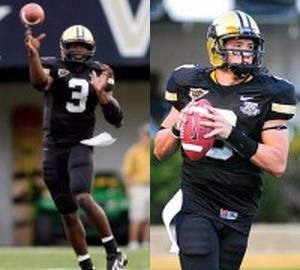 Alabama native Chris Nickson's standout sophomore season led most to believe that he would lead an explosive offense for Vandy in 2007, but leg and shoulder injuries, not to mention some inconsistent performance, derailed his season. After starting the first six games, he was pulled for Mackenzi Adams during the Georgia game. Adams led the Commies to an upset win over South Carolina the next week, and a second win over Miami (OH), but the rest of the season spiraled down into a four game losing streak. Both QBs have the ability to be the type of QB Vandy wants, namely a run/pass threat, but neither locked down the start during spring, and the Vandy offense will likely still struggle again this season now that leading receiver and favorite target Earl Bennett is gone, taking their leading rusher and the entire starting offensive line, including first round draft pick Chris Williams (LT), with him. It's hard to imagine that this will be a huge blow to the Commies in the coming season, though, considering they only sniffed the top half of the conference in rushing offense alone, gaining 150.2 ypg (3.7 ypc) for seventh best in the league (compared to our own beloved Tide, who averaged 149.2 ypg for 8th), and rose no higher than 10th in any other offensive category. Even with the all time leading receiver in the SEC they only managed 176.4 ypg (6.0 ypc) through the air, good for tenth best in the league, and the leading rusher, Cassen Jackson-Garrison, accounted for a relatively scant 594 yards on 148 attempts (4.0 ypc) and five TDs, compared to QB Adams, who 289 yards (89 att, 3.3ypc) and 3 TDs from under center. Packed with explosive punch these guys weren't, so even with the losses, it's all uphill from here anyway.

Rebuilding the line is the first priority, and thankfully for Vandy they have guys with backup experience and a handful of starts manning most positions. Replacing Williams at LT will be tough, but Jr. Thomas Welsh stepped in during the spring and seemingly locked down the position for himself. A former high school quarterback (shades of Lorenzon?), Welsh made the move to TE as a true freshman and saw action in 8 games as both a TE and a tackle, and also saw time in tne games last year on the line as a backup. RT Eric Hensley broke an ankle during spring practice, but is expected (and hoped) to be fully recovered in time for fall camp as his back up is a redshirt freshman, James Williams. The guards are Drew Gardner and Ryan Custer, both fourth year juniors. Custer has three starts to his credit as well as action as both a redshirt freshman and a sophomore in a reserve role, while Gardner, by most accounts, has only a tenuous hold on the right guard spot despite seeing time in 9 games last year. At center, Bradley Vierling was a key reserve last season seeing time in all twelve games (and in nine as a redshirt freshman), and looks like the player most likely to step into the starting role without any serious growing pains.

Second priority, of course, is finding someone to fill the pass catching shoes of Earl Bennett. George Smith and Sean Walker, two fifth year seniors, are the only true known quantities among the receivers. Smith grabbed 32 for 397 yards and 3 TDs last season, second best on the team, while Walker had 20 catrches for 270 yards and 3 TDs. Finding someone to complement them in the three wide sets Vandy prefers will be a tough job, though, as options are somewhat limited. Junior Justin Wheeler and redshirt freshman Udom Umoh saw a lot of quality time with the first team over the spring. Wheeler grabbed 10 for 87 yards and 1 TD last season, while the rest of the options at receiver have no game experience. There is talk, though, that cornerback D.J. Moore might be pulling some more double duty as a receiver this season. Moore lined up with the offense on several occasions last year, typically running reverses instead of actual routes (where he gained 87 yards on 6 carries, a nifty 13.0 ypc average), but expect to see him heading downfield as a pass catcher more this season.

Finally, the starting tailback position is almost certainly Jr. Jared Hawkins' to lose. Hawkins finished fourth on the team last season with 282 yds on 60 attempts (4.4 ypc) and 0 TDs, but Sr. Jeff Jennings (who finished second with 360 yds and 2 TDs) has yet to return to his pre-injury form after an ACL tear in 2006 sidelined him for the close of the season. Sophomore Gaston Miller, a 5'7" 170 lb back from Murfreesboro, TN sounds a lot like our own Terry Grant, a shifty runner that can make big plays if he gets open in space, can also help with the rushing woes of the Vandy offense.

After all the smack I just talked about the Vandy offense, the defense was more than respectable last season, reaching as high as fourth in the league in total defense by allowing only 325.2 ypg (as opposed to our own beloved Tide, who gave up 345.5 ypg) and finishing in the top half of the conference in every other defensive category save Red Zone, where they still managed seventh. Three big reasons were LBs Jonathan Goff and Marcus Buggs, DE Curtis Gatewood, and DT Theo Horrocks, all now departed and leaving a very shaky front seven in their wake. Only DE Steven Stone and LB Brandon Bryant return as starters. Stone had 78 tackles last season, including four sacks and four TFLs, while Bryant notched 30 tackles from the weakside position before injuries derailed his year after a meager three starts.

New faces on the defensive line include DTs Greg Billinger and Adam Smotherman, who combine for a whopping 7 tackles among them. Billinger, a Jr., accounted for six of them, while Smotherman, a So., saw time in seven games last year before being injured (all while recording only 1 tackle). Behind them there is no quality game experience, with a mixed back of redshirt freshmen and a lone Jr., Derrius Dowell, without a snap to their credits, so at least we can look at someone else's D-Line and pity their inexperience and lack of depth for a change. On the end opposite Stone is Jr. Broderick Stewart, a former TE who saw some quality time as a backup last year and actually led the team in sacks with six. 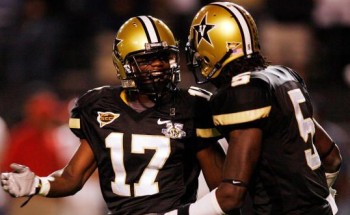 D.J. Moore and Myron Lewis will help anchor a solid Vandy secondary.
At linebacker, Bryant, a Jr., is joined by Patrick Benoist in the middle and John Stokes at the strong side. Benoist, a Jr., saw four starts last year while recording 32 tackles and four sacks, but Stokes, a So., recorded only seven tackles as a true freshman and could find himself pushed by incoming freshman DeAndre Jones, a three star recruit considered the tenth best player in the state of Tennessee last season.

The secondary is where Vandy's true strength lies, as all four starters return (as well as a returning starter at nickelback) to a unit that could be the most experienced in the league. CBs D.J. Moore, a 1st team all SEC selection last year, and Myron Lewis, who led the team in pass breakups last year with 12, form a solid CB tandem, and are backed up by Josh Allen and Darlron Spead, who have 14 starts between them and have played critical reserve roles for the Commies. At SS Reshard Langford, the second leading tackler among the DBs with 65, had 8 pass breakups and two picks last season, and he's backed up by Joel Caldwell, who saw 11 starts as a corner in '06. Meanwhile, FS Ryan Hamilton returns for his Jr. season as the second leading returning tackler with 68 (and 5 pass breakups). This is an experienced group that will be the cornerstone of the Vandy defense this year, and I wouldn't be at all surprised to see a lot of nickel looks from them come fall.

Looking at the schedule, there are two probable wins, three toss ups, and a whole lot of needed luck if the Commies are going to get bowl eligible this year. Duke and Rice are likely gimmes for the Commies, but that's about all the winning Vandy fans can rightfully expect this year. Of the toss ups, a season opener on the road at Miami (OH) could start their season off on a sour note. They played Vandy tight last season, falling 13-24 after leading 13-10 in the third quarter, and with 17 returning starters on a team that missed the post season by a touchdown and appeared in the MAC Title Game, they won't be the creamy pushover most would expect. Ole Miss and Mississippi State are also toss ups, with State looking like a better bet to fall than the Rebels, and splitting those two wouldn't be sretching at all. Of the rest of the season, well, there's not a lot of promise out there for Vandy fans. It's gotten to a point where they are almost guaranteed a scalp from the upper tier of the conference, but looking at that conference schedule I'll be damned if I can pick a likely candidate. South Carolina, last year's upset victim, should be much improved this season, while Auburn, Georgia, and Florida are just too talented at every position to be exploited easily. That leaves Kentucky and Tennessee. Both will also be rebuilding this year, but even then I just don't see them faltering that badly against a Vandy team short on talent and experience. Worst case scenario for the 'Dores, 2-10, while, sadly, best case is probably 4-8. This team just lost too much talent to reach last year's level, and I really have to wonder, if they didn't get it done then, will they ever?