According to a graphic on a recent article on ESPN.com, only 10 teams have started the season ranked #1 in the AP poll and have gone on to win the national title. The Bulldogs clearly have their work cut out for them, but that's not what this post is about. 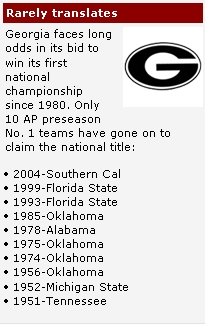 Anybody notice a team that should be on the list but isn't? I can't quite figure out what that says about me that I get hacked off about something that happened over a decade before I was born, but hey, it is what it is I suppose.

And no, I'm not going to include a YouTube of that Cake song.