Some thoughts on the hiring of James Willis:

1) For all the crap we are giving Auburn fans over their reactions, let's remember we were all a little taken aback that Lance Thompson would go to UT.  I personally wasn't ready to pull out the MS Paint traitor brush over it since "more money for less work" sounds like a pretty darn good idea no matter where the job is at (that plus the unfortunate personal matters that were brought to light in the wake of his departure equals get the hell out of town to me), but there was a good number of people on this blog that were apoplectic that he would leave Alabama for the Vols.

2) That being said, I'm glad we had a reasonably proper attitude about Thompson, as opposed to the paranoid ramblings y'all have linked to.  Personally, the idea that someone might actually believe that Willis is a super secret double agent sent by the Auburn powers that be to spy on Nick Saban "with current espionage technology" is a little far fetched, but then again I did (unfortunately) listen to about an hour of Finebaum the other day and at least 40% of the callers would be likely suspects to have posted that ridiculous load. 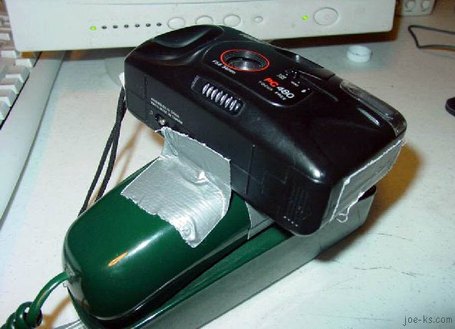 At first I thought posting a picture of a "redneck camera phone" and implying that was the extent of Auburn's "espionage technology" was too easy, but then I remembered where I blog and felt obligated to go for the cheap dig instead of trying to come up with something more clever. Auburn fans are rednecks.

I'm sure the reasoning behind Willis's decision to leave a program he has so many connections to for their in state betters rival went something like this: "I worked my butt off to keep the current recruiting class together during the coaching change, got fired for my efforts by the new coach (whom I've worked with while at Auburn, mind you), got rehired (though I reportedly had to pay back my severance from the firing) but somewhere along the way decided these jackasses weren't people I could really work with and certainly wouldn't feel any loyalty to me for sticking it out if Chizik should give a repeat performance of his glorious three year conquest of miserable failure in the Big 12 North, and decided to head somewhere with a little more stability that can springboard me into a better job in a couple of years." Sounds reasonable to me, just like Thompson's apparent motives were fairly reasonable. This is a business, after all, and no matter what the TET commentariat may think about "loyalty and the nature of The Auburn Man" all of that goes out the window when you have a family to feed and a career track to keep in mind. Maybe Willis isn't as keen on joining the trucking business in a few years as the rest of you.

3) With all that being said, the same "how can Lance Thompson go into a recruits home now and tell them that UT is where they should play ball after spending two years with Alabama telling them that UT omg sux lol " thoughts apply here.  Yes, ultimately a recruit is committing to the school/program and head coach, not the position coach that is recruiting him, but how does an Auburn recruiter not tell a kid "don't listen to Willis, he's a traitor that doesn't care about anything or anyone but himself and you'll be just another cog at Alabama because that's how ALL of their coaches are"?