editor's note: i am well aware that this looks a lot like the jccw's "google survey's the recruits" feature. the way i figure it, if we can steal their position coaches and increasingly precious three star commits, we might as well steal their bloggers' ideas as well. zing. 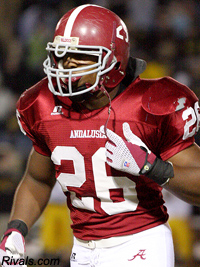 It's no secret that the Alabama linebacking corps is thin and lacking in talent. Corey Reamer did an admirable job moving up from safety to learn both the inside and outside linebacker positions during spring and fall, but there's no one behind him save true freshman Jerrell Harris and, being quite frank (to borrow one of OTS's favorite phrases), there was a reason he wasn't on the field when the nickel package came out. Reamer will be a senior this year and, even though he's got plenty of opportunity to keep his starting spot on the outside, finding someone to step in and be the kind of elite linebacker Saban wants is a priority. Rated by Rivals as a "6.1" (which, in their parlance means "Franchise Player; considered one of the elite prospects in the country, generally among the nation's top 25 players overall; deemed to have excellent pro potential; high-major prospect"), Johnson certainly fits that description.

Overall, yes. Right away, probably. The real question is "where?" At 6'3", 226(ish), he's already comparable in size to both Reamer and Harris, though ESPN seems to think he could work up to 240 and do work in the middle. Scout agrees, ranking him the #2 MLB in the country, but unfortunately for him Hightower and McClain have pretty well cemented the starting spots there. Unless the staff is willing to let a talent like Johnson sit a year (or he's unable to pick up the schemes quickly enough) to groom him as the eventual replacement for McClain (who could very easily be a first round pick after the coming season), fitting him in at OLB seems like the quickest way to get him on the field. Rivals agrees with me (because they know what's good for them), and has him ranked as the #2 OLB in the country.

What are they saying?

ESPN has Johnson ranked at "84," which basically means he could play as a true freshman. He "(s)teps up and fills hard, showing explosiveness in space and on contact. Has above-average short-area speed and burst attacking downhill between the tackles. Generates speed quickly, brings good power to the point of attack and rarely gets turned out of his gap. His excellent blend of size, strength and deceptive lateral quickness in traffic makes him difficult to block."

Scout is equally impressed, saying he is a "very physical player who runs through his tackles, Johnson is also agile enough to change direction while in pursuit. He has soft hands and light feet, but is a heavy hitter who causes turnovers on contact."

Most criticisms of Johnson center around his "foot quickness," with ESPN noting that he is "(s)ometimes...caught flatfooted when diagnosing the run" and that his "reactive athleticism appears marginal at times."

Hatas knock, cause we on the grind and they not

Johnson held offers from Auburn, LSU, Ole Miss, USC, Tennessee, Texas A&M, Florida, Florida State, Georgia, and Arizona State, but committed to Alabama way back in September, reportedly to be close to home and his ailing mother, who thinks the world of him:
"Nico's a kid who's easy to love," Mamie said. "He just goes the extra miles whenever he can to do something for his mother. He's always willing to go to church when I say we should go. And he beats me getting ready to go. It's a blessing to have a well-behaved child like he is."