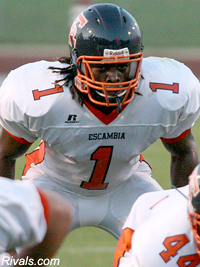 Despite some serious depth at running back, Richardson is simply too good not to offer. Saban is known to prefer multiple back systems, and as many as three different backs have gotten significant snaps during a single game since his arrival at Alabama. Now that Coffee has chosen to enter the draft, the backfield is looking a bit thin on guys that jump out as big time playmakers at running back. Second leading rusher Mark Ingram is the odds on favorite to lock down the starting position, but even he struggled with consistency issues, often times trying to break plays to the outside instead of letting his blocks develop (a routine mistake/poor habit of many a true freshman running back), instead yielding to the erstwhile "Irrelevant" Roy Upchurch, who saw limited time as a role player before becoming the conquering hero of Knoxville and then fading back into the bunch with injury concerns. While there are certainly plenty of guys on the roster that can be a second (or third) option in any given situation, having a player like Richardson who has the ability to not just play right away but be a true playmaker as a freshman is a priority for the restocking of the Tide roster.

As with Nico Johnson, the question isn't so much a matter of "can" as "where will?" Unlike Johnson, we're not talking about position, but which program. Richardson has been a Tide commit since early June, though he's been very diligent about taking all of his official visits and has come away from each one sounding torn over his options. Most suspect he'll still land with Alabama come signing day, but after his visit with Florida (and with another official visit to Florida State this weekend) the decision between Alabama and the Gators is now "neck and neck."

"An extremely hard runner, Richardson fights for every last inch when he has the ball in his hands. He is extremely hard to knock off his feet and breaks tackles well with his balance. He sees the hole and attacks the second level of defenders punishing smaller linebackers and defensive backs"

"Richardson has the strength to pound between the tackles and the perimeter speed to turn the corner and go the distance. He possesses great size: a compact, thick frame and very good upper- and lower-body strength. Can be a durable high-carry college back who can wear down a defense. He's a violent runner with great slashing, one-cut ability."

Rated a 6.1, meaning "Franchise Player; considered one of the elite prospects in the country, generally among the nation's top 25 players overall; deemed to have excellent pro potential; high-major prospect"