The Curious Case of Petey Smith

Share All sharing options for: The Curious Case of Petey Smith 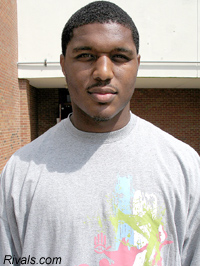 I'm sure I'm not the only Tide fan that thought to himself "why are we wasting a scholarship on some three star Auburn commit when there are bigger, shinier fish left on the board" when Petey Smith up and declared that Alabama was his runaway favorite after James Willis had been planted as a spy hired. After hearing all the "top linebacker" and "highly sought after linebacker" talk over the last few days, though, I started looking a little closer and really can't get a read on this kid and what kind of prospect he really is.  He held offers from Alabama, Auburn, Clemson, Florida, Florida State, Miami, Michigan, North Carolina, Ohio State, and Tennessee, all BCS powerhouses, despite Scout and Rivals both rating him as a three star, with Scout being a bit higher on him with a #19 position (ILB) ranking to the #32 ranking awarded by Rivals.  Meanwhile, ESPN has him as the #5 ILB in the country with the same scout rating as the four starred #5 ILB for Rivals, Tana Patrick. He's also only rated three points below five star compatriot Nico Johnson, ESPN's #2 ILB. Here's what they have to say about him:

Simply put, Smith is a dominant inside run stopper at the high school level. He possesses superior size and strength than most of his opposition and steps down fast when filling his inside rush lane. Very explosive at the point of attack: fills with a wide base and knocks blockers upright with great force. The pile consistently goes backwards when this kid is in on the play. Bottom line, Smith is a great prospect for a team struggling to stop the run. He plays fast and physical on every snap and is ready to make the jump to the next level. If he can add a bit of finesses and flexibility to his game; production should be huge as a college middle linebacker.

Rivals rates him a 5.7 (Tana Patrick is a 6.0), one tenth of a point from the "All-American Candidate" cutoff point but still a "high-to-mid-major prospect; deemed to have pro potential and ability to make an impact on college team." Criticisms of Smith generally center around poor sideline to sideline pursuit and a lack of fluidity when pursuing through traffic, though most of the services agree that he is a solid middle linebacker that could be something special. Perhaps he's lacking that oh so important fourth star because they see him as a one trick run stuffer? Maybe. The question now is, why are we after him?

Alabama already had three linebacker commits before Smith (if we count Mike Marrow as a LB prospect), and most believe Tana Patrick will don a Crimson (or possibly Houndstooth) hat on National Signing Day. Of those four, Nico Johnson and Patrick are the "elite" linebackers of the group, while Marrow and Jonathan Atchison have "role player" written all over them (at least for now).  Atchison, listed at 6'3", 215(ish), is considered an OLB prospect by Rivals and Scout, and even a DE/OLB "tweener" (or "Jack linebacker," as we call it.  Less sissy.) by ESPN that can put his hand down in passing situations. Marrow, meanwhile, could be either a middle linebacker, a true fullback, or simply a short yardage power runner depending on where the staff feels he'll best stick.  So where does that leave Petey?  Honestly, I don't know.  At 6'0", 240, he's got the size for one of the inside linebacker spots or possibly Jack.  Current starting Jack LB Brandon Fanney is listed at 6'4", 241, but if Smith really does have trouble with sideline to sideline pursuit that's not a good fit for him.  So are we keen on him as a middle linebacker?  Let's remember that, after Hightower and McClain, Prince Hall is really the only proven SEC caliber LB we have on the roster.  Charlie Higgenbotham and Alex Watkins have shown some promise, and there are still a few guys from last year's signing class that could make an impact (Upshaw, Bolton, Jordan), but right now adding depth that the staff feels can be redshirted and coached has to be the reasoning behind bringing Smith in so late in the game with few spots left and several big targets still left out there.  Right?