It's a Special Type of Hurt

Share All sharing options for: It's a Special Type of Hurt 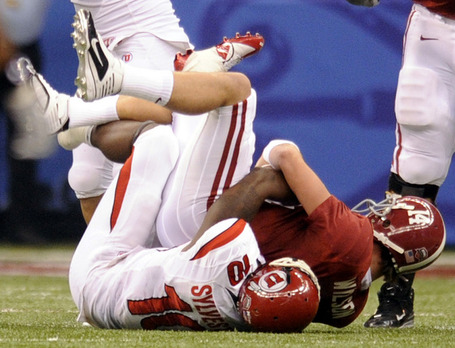 Watching Wilson get sacked over and over again was the most painful aspect of last night's game. He's given everything he has this season to get us to 12-1 after being ridiculed his entire career, and he didn't deserve to go out like that. I know, I know, "the o-line didn't give up 31 points," but football is a team effort and, not to be cheeky, it took the entire team to lose this one. Not to take anything away from Utah, but the Crimson Tide team that we watched last night wasn't the Crimson Tide team we've watched all season, and that's what makes it more painful. "What if?" is the worst feeling you can have to end a football season, and last night was nothing but a gigantic "What if?" What if Andre had played? What if Johnson hadn't been lost so quickly? What if Wilson hadn't thrown the first pick under pressure to gift wrap their second TD? What if Wilson hadn't lost the ball getting sacked on what started as a promising drive? What if Boswell had come in at LT instead of moving Davis, who had never practiced there? What if Caldwell had moved over to LT and let Cardwell play center? What if? Someone noted in the comments that we won the last three quarters 17-10, and I keep thinking "if we could have only moved the ball when we needed to, we could have overcome the 21 points in the 1st." I honestly believe that our real o-line would have been able to do it, and it's sad and it's frustrating and it's infuriating that they weren't out there, but it's also a reminder that we're not quite there yet relative to the process. This was a miracle season where we got by on a lot of injury luck and some outstanding individual effort from some key guys, but last night our lack of depth was exposed, and it was just one more reminder how "close" we are after years and years of being "close." NSD is rapidly approaching and there will be more and better players coming in once again to help in the continual rebuilding of the Alabama football program, but "next year!" is little comfort while staring into the cold black that is the offseason.