Week Six Box Score and Such: You Know, We Really Didn't Do That Bad

Share All sharing options for: Week Six Box Score and Such: You Know, We Really Didn't Do That Bad

When I set out to do this, I fully expected to see horrible numbers from the offense and a stellar performance by the defense.  I was half right; the defense played lights out through the whole game and, aside from the North Texas game, it was our best overall defensive performance to date.  The offense, though....well, let's just look at the numbers: 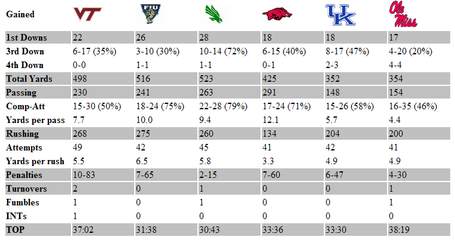 Apologies for going the tiny image route, but the actual tables were too wide. Click to enlarge.

First thing you should notice, and the biggest reason we seemed so out of sorts on offense yesterday, are the 3rd down conversion numbers and the pass completion percentage.  4 for 20 on third down and a 46% completion rate are our worst showings so far, yet look at the rest of the numbers.  17 first downs is also our worst showing, yet it's only one less than we managed against Arkansas and UK, while we converted 4 of 4 4th down attempts, one on a fake punt and another that resulted in the lone TD of the game (Who says killing for money has to lack style?). Further, the total and rushing yardage numbers are on par with last week.  So even though we had an ugly game passing, we still were able to match our productivity last week.

One more note: Best game penalty wise since North Texas, so we have that going for us, which is nice.

On to the defense.  Unlike the perception of a horrible offensive performance not coming out in the overall numbers, the perception that we completely dominated on defense was pretty accurate: 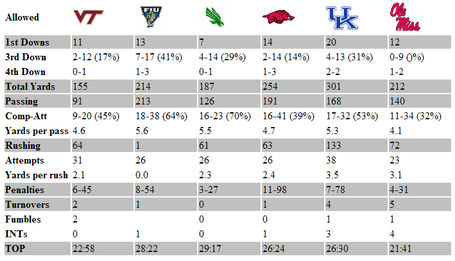 All in all, I feel better about this game than I did yesterday.  The defensive performance was as solid as it seemed, while the offense didn't do as poorly as we thought.  And in the end, it's another three score victory over an SEC opponent on the road when we weren't playing our best.