Share All sharing options for: Running Back Success Rates vs. South Carolina

I feel a bit strange writing up this week's RB success rate analysis. Deeming anything Mark Ingram did on Saturday as a "success" takes away from the splendor of what actually went down. Furthermore, deeming any other runs as unsuccessful makes me feel a little guilty even though the entire point of this piece is to look at things on a carry by carry basis. Mark, if you're reading this, I consider your night a 100% success, so please don't hold the number crunching against me... 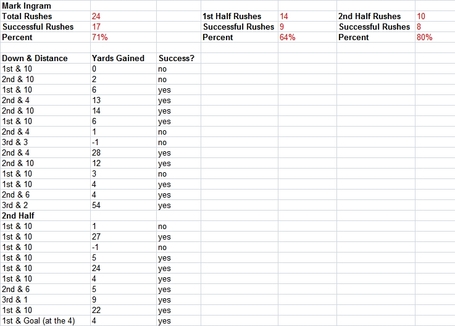 What can you even say about Mark Ingram's night that hasn't been said already? Not much. I will highlight some specifics though that are downright insane:

Wrap your head around that for a minute. Over 20% of his carries went for 22 yards or more and we're talking about a 20+ carry game. Ridiculous. All six carries on his "miracle drive" were a success. An entire drive where the same player got every touch with a 100% success rate. Astounding. Call me guilty of hyperbole, but it was amazing to behold.

Upchurch is getting back into the swing of things and had a few carries instead of just being in for passing downs:

Roy had a good day in limited play. No negative plays, 75% success rate and all three of those carries were for five yards or more. Coupled with two receptions out of the backfield it's good to see him getting more touches. Hopefully Upchurch can contribute more in the coming weeks.

Not a stellar day for Richardson, but it didn't have to be with the way Ingram was running (and Upchurch looked to be running.) Two really solid gains combined with two negative plays and one no gain. Trent's coming along just fine though, so I'm not really worried about it.

We did have one running play from Maze that wasn't a success, so I'm not going to build a chart for that.

Overall, we had 34 designed run plays and 23 of them were successful for a team rate of 68%. Needless to say, it was frustrating we only scored one offensive touchdown with running game production like that. I'd like to think it's a statistical aberration for the offense, but it's hard to say (I still need to process the Ole Miss numbers) since we have been on a dry spell in the TD department lately.