Share All sharing options for: Tennessee Hate Week: A Hatred Born of Respect?

The following is an excerpt from my contribution to Rocky Top Talk's Maple Street Preview Rocky Top Tennessee.

This, my friends, is where rivalry gets weird.  We could sit and talk about how much we absolutely hate each other from sun up to sundown, and yet in the back of my mind and in the back of yours, you know it's true.  We hate because we know the other is worth hating.  Simply put, there is only one other program in the SEC that even comes close to touching the history and tradition of my beloved Crimson Tide and, as painful for me as it is to admit, that program is your own Tennessee Volunteers.  Both teams share remarkable achievements throughout their history and have had some of the best players and coaches to ever stand on a college sideline grace their rosters.  For example, Alabama and Tennessee are the only two SEC teams to represent the east in the Rose Bowl before it became a strictly Pac-10/Big Ten (or, at the time PCC/Big 9) affair.  Of course, we went 4-1-1 in the Rose Bowl and, in doing so, put southern football on the map while y'all were 0-2.  Just being invited is an honor, though, right?  Further, Alabama and Tennessee are the only two SEC schools in the top ten in all time wins (#7 and #9, respectively) AND winning percentage (#6 and #10, respectively).  Alabama and Tennessee have more National Titles (we claim twelve, y'all claim six, and Florida is a distant 3rd with three), more conference titles (Alabama has 21, Tennessee 13, and Georgia is a close 3rd with twelve), and more bowl appearances (Alabama with 56, Tennessee with 47, and Georgia in 3rd with 44) than any other team in the SEC.  I'd almost say Alabama and Tennessee have the more bowl wins than any other team in the SEC as well, but UT and Georgia are tied for second with 25 each, so we'll just keep that one for ourselves.

Going beyond the considerable achievements of both programs, look at the star players that made those achievements possible.  With 168 All-Americans between the two teams, one would be hard pressed to name even a fraction of the legends that have squared off against each other in late October.  Just from my own lifetime names like Shaun Alexander, Reggie White, Derrick Thomas, and Peyton Manning instantly spring to mind, and I won't even try to begin to start rattling off names like Joe Namath and George Cafego.  Even beyond the players, though, there are two names left to mention that are the biggest reasons both Alabama and Tennessee are considered two of the preeminent football powers in the history of college football.  I'm speaking, of course, about Robert Neyland and Paul Bryant, two of the greatest coaches to ever walk a sideline.  The SEC is littered with "legends" like Johnny Vaught and Shug Jordan, sure, but no two coaches in the SEC's history have built the kind of juggernauts and secured such high esteem for themselves even to this day that Neyland and Bryant did.  When you take all that into account, there's really not much else to do but tip our caps to one another, wish each other well ‘til October, and then bring the knives out.  Roll Tide.

I post it here today because I think it illustrates a point about this rivalry that has been lost over the past decade; The Third Saturday in October has historically and traditionally been a meeting of the two premier powers of southern football. We measured our strength against each other as worthy (though certainly hated) opponents, not as enemies bent on the destruction of one another. The past decade (or so) has not only seen a genuine, malicious hatred spring up between our two teams, but has also seen a steady decline in national (and even conference) relevance for both programs. But with coaching changes and a renewed commitment to regaining national prestige by both programs, there is hope that our rivalry can return to one where we match strength against strength, not grievance against grievance. In other words, we can still hate them, but let's do it for good reasons. 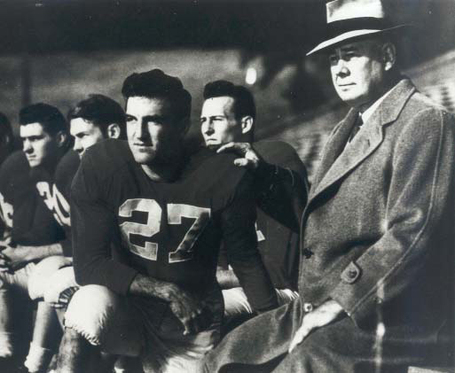 Some coaches are worth your hate, while others...