With Win Over LSU, 'Bama Clinches Trip to Atlanta

Share All sharing options for: With Win Over LSU, 'Bama Clinches Trip to Atlanta

When LSU comes to Tuscaloosa in nine days, Alabama will have the opportunity to officially stamp its ticket to Atlanta for a rematch with Florida in the SEC Championship Game. How? Let's take a closer look. The following is the current pecking order of the SEC West: 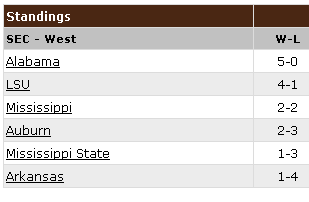 With a win over LSU, Alabama would move to 6-0 in conference play. That 6-0 record would mathematically eliminate Auburn, Mississippi State, and Arkansas from contention, simply because since they already have at least three conference losses, it is not even theoretically possible for them to get to the 6-2 mark to tie the Tide.

The only two teams left in contention would be 5-2 LSU and 5-2 Ole Miss. Alabama could, of course, lose its final two conference games against Mississippi State and Auburn, but even if so we would still win the West. With both LSU and Ole Miss having at best 5-2 records -- assuming 'Bama beats LSU -- after next weekend, keep in mind that LSU plays Ole Miss in Oxford on November 21st. One of those teams will, obviously, lose that game, so one of them would fall to three conference losses. Thus, regardless of whether or not Ole Miss wins out from here, or LSU wins out after losing to 'Bama, the absolute best those two teams could hope for -- even if 'Bama implodes against MSU and Auburn -- would be to finish tied atop the West with 'Bama at 6-2 each, in which case Alabama would go to Atlanta because we would hold the tiebreakers over both Ole Miss and LSU thanks to our head-to-head victories over them. As a result, regardless of what happens the rest of the way, 'Bama clinches a trip to Atlanta with a victory over LSU.

On the other hand, if LSU beats 'Bama, things get a lot more dicey. A loss to LSU wouldn't necessarily mean that the Bayou Bengals go to Atlanta, but it would certainly muddy the water. Even with a loss to LSU, 'Bama would likely still finish up with a 7-1 record in conference play, and thus LSU would need to beat both Arkansas and Ole Miss to head to Atlanta for their own rematch with the Gators. That's no small chore, mind you, especially considering that they lost to both of those teams a year ago, and as a result even if 'Bama loses to LSU next Saturday, we still have a pretty good chance of making Atlanta regardless. Hell, who knows? Maybe the smart money would still be on 'Bama making it back to Atlanta, but clearly that's not a risk we want to take.

And, believe it or not, a 'Bama loss to LSU would open the door back up for Ole Miss. The odds of this happening are pretty slim, but it's not beyond the realm of possibility. If 'Bama loses to LSU, Ole Miss would need to win out -- i.e. beat Auburn, Tennessee, LSU, and Mississippi State. They would also need LSU to beat Arkansas, and / or get 'Bama to lose to either Mississippi State or Auburn (or both). If we only lose to one of either MSU or Auburn and LSU beats Arkansas, that would create a three-way tie atop the SEC West at 6-2, and believe it or not Ole Miss would go to Atlanta -- 'Bama would be eliminated from the tiebreaker because we would have two SEC West losses, and Ole Miss would go over LSU thanks to the head-to-head tiebreaker. On the other hand, if we somehow lose both games to Auburn and MSU, Ole Miss can go to Atlanta simply by winning out from here. Obviously there's a really small chance of any of that happening, but nevertheless Ole Miss stays alive with an LSU victory over Alabama.

And that's how it all shakes out in the West. I think you have to feel pretty good about our chances of getting to Atlanta or a BCS game even if we lose to LSU, but even so you clearly want to seize control of your own destiny and go ahead and stamp your ticket back to Atlanta once and for all.