Poll Question: Who is the Most Improved Player of 2009?

Share All sharing options for: Poll Question: Who is the Most Improved Player of 2009?

Certainly a little early for this since a whole season's body of work would probably tell us a lot more, but five weeks into the season we've seen some guys really step their game up from previous seasons and we'd like to highlight them a little bit. 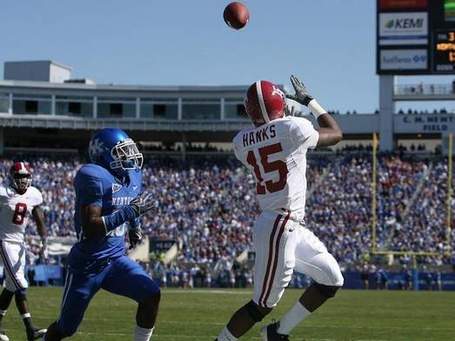 We've heard for so long now how Darius Hanks was going to be one of the next great wide receivers at Alabama, just you wait. And wait we did as Hanks struggled to turn his practice field heroics into game day production. Considered a "starter" in the slot during 2008's spring camp, Hanks effectively disappeared with various injury concerns before he could really get on the field. Though he was finally able to work his way onto the field near the end of the season, he only played in five games, grabbing eight passes for 88 yards with a long of 18 yards. So far this year he's played in every single game and has already topped last year's production with 9 catches for 160 yards and a TD while effectively becoming our most consistent and productive true receiver (though Ingram and Peek have more receptions with 14 a piece, Hanks is tied with Julio for most receptions by a receiver and leads all receivers in yardage).

After Ingram's monster true freshman season it seems a little strange to think of him as a candidate for most improved, but let's face it, Ingram was behind Coffee all last year for a reason. As mean as he was between the tackles, he still struggled with following his blocks and finding the hole and would often try to bounce it outside, usually into the arms of a waiting linebacker or safety. He also struggled at times with pass protection, tipping our hand offensively when he was on the field since opposing DCs knew Ingram was out there to run and run alone. This season, though, Ingram has become a complete back, pass protecting like a true veteran, catching the ball well out of the backfield (in fact, his three TD receptions lead the team) and, most importantly, showing the kind of patience and maturity a running back needs to allow plays to develop and to hit the hole as it opens instead of trying to break everything wide.

Finally, the speedy deep threat we've all been salivating over and a QB that can get him the ball. Maze, like Hanks, is one of those kids that always sounded like he was going to be a world beater from the practice reports but was never really able to show it on Saturday. So far this season, he's finally flashing the kind of play making ability we all suspected he was capable of. Though his two memorable TDs from last season were fun to watch, he only got into seven games and caught 11 passes while he's already grabbed 8 in four games this year and has two TDs already as well. Though he is our best deep threat so far, he's also shown good ability to get open undernearth instead of just burning DBs with his speed downfield. 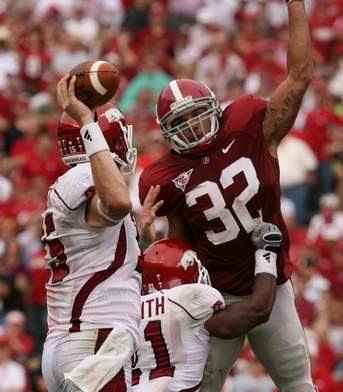 This kid gets my vote, hands down. Anders has gone from being a virtual no name (Rivals didn't have him ranked at all, while Scout gave him a single star) to a starting linebacker position on an elite SEC defense. Though he played sparingly in '06 and '07 (mostly on special teams and as a reserve), he came out of nowhere in 2008 to be our best pass rusher from the linebacker position and was frequently on the field on 3rd down. In 2009, he's solified himself as a true every down Jack linebacker despite his relatively small size and has proven versatile enough to play out in space as an outside linebacker after Dont'a Hightower's unfortunate injury shuffled the linebackers around. He's currently fourth on the team in tackles with 22, and his 2.5 sacks is 3rd behind Marcell Dareus (3.5) and Javier Arenas (3.0), while he's also responsible for 5.5 tackles for loss (leads the team), an INT, a pass breakup, a forced fumble, and 4 quarterback hurries.

I'm sure this pick will go over well. Despite the many criticisms that Johnson has gotten in the comments section of this blog, he has locked down his role as our third corner and, considering we've played so much in the nickel with Arenas at Star, has effectively been a starter on the outside this year while B.J. Scott (whom Saban has said he expects big things from in the future) is looking at a redshirt and Dre Kirkpatrick is relegated to special teams and mop up duty. If we had done a poll before the season as to who should be the third CB, Johnson, Scott, or Kirkpatrick, I could guarantee you that y'all would have voted for Kirkpatrick or Scott in a landslide. Instead, the guys that are getting paid the big bucks to evaluate talent and put the best players on the field have Johnson out there every Saturday instead.

Though Barron saw a lot of action last season, he generally struggled with grasping his role on the defense after being asked to do too much, a fact that Saban himself admitted earlier in the year. Now that Barron is a stong safety and a strong safety only (he's started all five games there this season despite Robby Green's push for a start during the spring), he's blossomed into one of our better defenders. Barron is second on the team in tackles with 28 (behind Rolando McClain's 35), his two interceptions and 6 passes defended lead the team, and his four pass breakups are behind only Kareem Jackson's five.

Another strange one to consider "improved" after turning into one of the best corners in the SEC last season on top of being a true playmaker as a kick return, Arenas continues to develop in both roles in 2009. As a DB, Arenas has spent a lot of time at Star so far this year as we've stayed in a 3-3-5ish nickel look against the many spread teams we've faced. With teams routinely throwing away from him, we've utilized him in different ways, and surprisingly his 3 sacks are second on the team behind Marcell Dareus, while he's third on the team in total tackles with 26.

As a kick returner, he's shown better patience and maturity while fielding kicks. Instead of catching any and everything that came his way and trying to break it (which resulted in some great returns last year, no doubt, but also some serious frustaration fumble wise), he's picking his battles a little more carefully. Though he has yet to take one back for a score yet, he's still managed to set up the offense on several occasions with great run backs.

Last but not least, young Fitzgerald continues his trend of improvement this year with an average of 42.3 yards, and improvement over his 41.1 yard average last year and the dreadful 38.7 in 2007.