Running Back Success Rates vs. Kentucky

Share All sharing options for: Running Back Success Rates vs. Kentucky

You know the drill, but for those of you that might be tuning in for the first time, an individual carry is considered successful if:

We didn't hit Kentucky with our normal assault of four backs getting multiple carries. Upchurch got a carry and McElroy did a QB sneak and Maze took a handoff, but otherwise, it was Ingram and Richardson doing the work on the ground. First up, Mark Ingram: 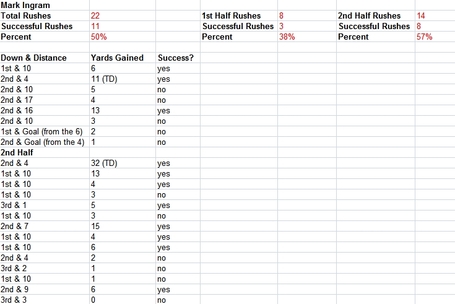 They way we sliced through Kentucky's defense on the opening drive, I thought it was going to be a track meet all day and that we would run at will and easily rack up well over 200 yards. It didn't quite pan out like that as Kentucky's defense stiffened quite a bit in the first half and made things tough on us at times. We did crack the 200 yard mark, but wouldn't have done so without PJ Fitzgerald's run off of a fake FG attempt. Anyway, onto Ingram specifically. He was put in some pretty tough spots in the first half where success was almost impossible on a running play (2nd and 10 yards or more for four of his carries....only one of which was a success.) Ingram and co. turned things up quite a bit in the 2nd half and the numbers improved dramatically. Glad to see that the offense can get better as the game goes along. Nice to see us still busting off some big runs. Ingram had five carries of 10 yards or more (two of which went for touchdowns.)

Next up, Trent Richardson:

Richardson didn't exactly have a stellar day carrying the ball. Out of 14 carries, his longest was five yards and over a third of his carries went for 0 yards or lost yardage. Many of his carries came in the fourth quarter when we were thoroughly in "kill the clock" mode, so some of it can be explained away by everyone knowing what we were going to do. That being said, it still wouldn't have been a memorable performance even with those carries eliminated. The good news though is that Ingram was on, and with us having multiple quality backs, one is likely to always be on.

Upchurch only had one carry: He gained 13 yards on a 3rd & 6 situation for a success.

Greg McElroy had a successful QB sneak and Marquis Maze gained 3 yards on a 1st & 10 for an unsuccessful attempt.

Our rate for the team overall was 41%, which is a dramatic improvement over the 23% rate we turned in against Arkansas.