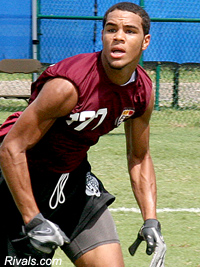 The RBR Meat Market has been incognito for the past couple of months, and the main reason for that has simply been a lack of news. We did so well in securing early commitments that space got very tight, the remaining prospects on the board were generally going to wait a good bit longer to commit, and there was just very little to discuss. Now that a couple of months have passed, though, we've got a pretty good bit of new developments, and more than enough new material to justify another edition of the Meat Market. So, that said, let's talk recruiting:

Keenan Allen continues to rise on everyone's board, and he has now clearly established himself as a nationally elite recruit. Rivals.com, in fact, now rates him as the #8 overall player in the country, a five-star recruit, and the #1 athlete in the country. Allen is a versatile player who could play on either side of the ball, but Alabama is apparently recruiting him as a wide receiver right now. Whatever we're doing, it's clearly working because we are the big leader for Allen, and frankly it seems like it will be a matter of when we get his commitment, not if. Oregon was our main contender in this battle, but even the Duck faithful have admitted defeat. Hopefully we'll hear the good news in the near future on Allen, but I wouldn't necessarily say that a decision is imminent just yet.

C.J. Mosley remains the top in-state prospect left on the board -- and probably the only remaining in-state player who will get a firm offer -- and he is clearly an Alabama v. Auburn battle at this point. Mosley is a smart kid who also sports offers from the likes of LSU and Stanford, but even he is pretty open that he is going to remain in-state. This is basically your traditional battle between in-state rivals over the homegrown talent, but fortunately for the Tide most think that Mosley is an Alabama lean. He would clearly get earlier playing time at Auburn, no doubt there, but he visits Tuscaloosa frequently and the consensus opinion is that the Tide will ultimatetly get his signature. That said, don't expect anything anytime soon. Mosley will take official visits to both Alabama and Auburn, and he will likely wait until very late in the process to make an announcement. Expect an announcement on, or near, National Signing Day.

JuWuan James made plenty of news when he officially de-committed from Alabama several weeks back. Given what we have learned, it is clear that he was concerned with our NCAA sanctions, and there seems to be almost no doubt whatsoever that the Tennessee coaching staff was (and probably still is) fanning those fires. James still says he is considering Alabama, but I'd be shocked if he ended up with the Tide. James himself recently said in an interview that the Alabama coaching staff had only called him once since he de-committed -- i.e. probably when they called him to ask what happened -- and that he had no other contact from Alabama. In other words, that's just a nice way of saying that we aren't really recruiting this young man any more. He may say Alabama is still under consideration, but we are not recruiting him at the moment and I doubt we would take his commitment in the future. James will end up at either Tennessee or Georgia, bank on it.

In James' absence, however, there is no shortage of high-end offensive tackle prospects left on the Tide's board, and we will surely get one or more of them. James Stone of Tennessee is probably the highest player on our board right now, and the general feel on him is that he is an Alabama lean with Tennessee a close second. We've always been in good standing with Olive Branch's Damien Robinson, and most think we can probably get him if we want him. Arie Kouandijo is still high on the Tide, and don't sleep on Ed Christian. The four-star tackle recently de-committed from Florida State -- he's abandoning the sinking Seminole ship, basically -- and he also plans to take an official visit to Tuscaloosa. In other words, again, even without James, 'Bama still looks to close with one or more high-quality talent prospects.

Ahmad Dixon is a prospect that everyone should keep their eye on. The Waco native is considered by many to be a five-star prospect -- like Scout.com, for example -- and even the lower ratings have him as a very high four-star. He was committed to Texas, but reneged there and committed to hometown Baylor. He's reneging there too, now, and I don't think anyone believes he will ultimately end up at Baylor. Dixon is a great prospect who is clearly very interested in the Tide, and everyone should keep a close eye on him. The only problem here, really, is that we are pretty loaded right now at safety, and that will probably be a turnoff to Mr. Dixon. At the beginning of 2010, our depth chart at safety includes Mark Barron, Robby Green, Rod Woodson, and Robert Lester, which is to say nothing of 2010 safety commitments Nick Perry and Jarrick Williams. Moreover, that is to say nothing of the possibility that 2010 commit Blake Sims ends up at safety as well (which many think he will). Clearly, that abundance of depth isn't helping our cause here.

John Fulton remains a very high priority for our coaching staff, and thankfully we are making some in-roads. We led for the South Carolina prospect early, but the hometown Gamecocks came on strong over the summer to move into the lead. Thankfully, though, a long phone conversation recently with Alabama head coach Nick Saban moved 'Bama back into a tie for Fulton, and he will be making an official visit to Alabama for the South Carolina game in two weeks. Hopefully we can nab Fulton, but it's going to be a tough pull. It seems like he is under a lot of pressure to stay in-state, and South Carolina has had such great success in recent years putting defensive backs into the NFL that -- even with their struggles as a whole -- Columbia remains a highly-attractive destination for a top-flight defensive back prospect like Fulton. Fulton will probably wait a few more weeks to announce his decision, but keep in mind that he is graduating high school early and enrolling early, so we should have something official on him by December at the latest.

Delvin Jones is an interesting prospect that everyone should keep their eye on. The 6'6, 220 pound prospect out of Miami committed to Tennessee in mid-August, but he has been seemingly waivering a bit as of late. Tennessee is recruiting him as a tight end only, but Jones wants to play defensive end, and Nick Saban is giving him the opportunity. Jones racked up 20 sacks last year as a senior, and his long frame should give him the ability to put on the weight he would need to play end in the 3-4. This one is far from a given at this point, but we are clearly making a run at Jones, and Tennessee's early-season implosion under Kiffin is only helping our cause.

Storm Johnson, the tailback prospect out of Georgia, is claiming an Alabama offer and that are recruiting him pretty heavily. If you remember back a few months ago, Johnson was planning on committing to LSU, but apparently they didn't want him just yet -- that's my best guess anyway -- and now he is looking around elsewhere. I'll be honest, I'm not really sure how serious our interest in Johnson is at the moment. I didn't think he had a firm offer from 'Bama back when he was flirting with LSU, and I still don't necessarily see anything objective that would cause me to change my mind. For now, we'll just keep an eye on him in the coming weeks.

The recent flip of Craig Sanders to Auburn has a few concerned with Corey Grant. The Opelika product did attend an Auburn game earlier in the year, and that did fuel some speculation. Nevertheless, Grant came out a couple of days ago and was very open about the fact that he just went with some friends for something to do, stating that he would only officially visit Alabama and would ultimately sign with the Tide. Some look at that with skepticism because both Sanders and James reaffirmed their Alabama commitments mere days before de-committing, but with Grant I'll take the glass half-full approach. He committed to us, said it was final when he did it, and now says he is still firm and will only visit Alabama. Until I see something otherwise, that's the story I'm going with.

Many are still wondering about the status of 2008 Alabama signees Devonta Bolton and Brandon Lewis, and honestly we have very little news to report on them. They are still enrolled in JUCOs and working towards their degree, and we really just know nothing more now than we did several weeks ago. Clearly the de-commitments of Sanders and James didn't increase their chances of getting caught in the numbers crunch, but that is not to say that these two will definitively be part of the 2010 recruiting class. I've speculated previously that these will probably be members of the 2010 class if they can graduate early and enroll in January, and that Bolton is a higher priority than Lewis, and I still feel confident in that. Nevertheless, though, even with that said, we really do not know exactly what is going to happen with these two just yet.