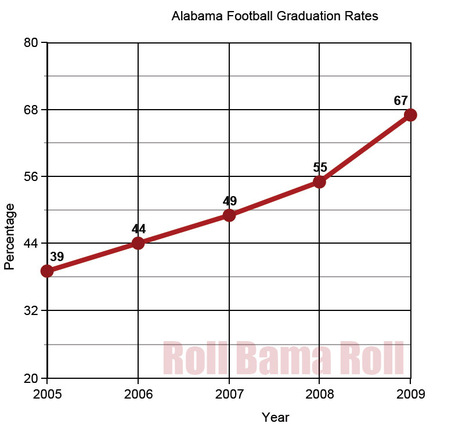 With Senior Day almost upon us, I though it might be appropriate to consider graduation rates for Crimson Tide football. It just so happens that earlier this week, the NCAA released it's Graduation Success Rate data. While this was met by the usual chorus of praise from the applicable panjandrums it's probably safe to say almost none of us paid much attention to it at the time.

It turns out the numbers are pretty interesting. The graduation rate for the four-class average - the cumulative tally of students entering college between the fall of one year and the fall four years later -  for Alabama football has risen steadily over the past half-decade. In fact, as the Tuscaloosa News points out, the GSR numbers for both football and men’s basketball "are higher than the university’s overall graduation rate."

So it seems The Process most certainly does include academics. But then I got to thinking... how does this stack up against the other football programs in the conference? The answer is after the jump.