Got Chart if You Want It: Iron Bowl Comparisons

Share All sharing options for: Got Chart if You Want It: Iron Bowl Comparisons

...or, Guess Who Found an Online Graph Generator?

OTS's monstrously in depth preview will be up later, but for now I thought we'd compare performances between common opponents.  The Tide and Tigers have played six of the same teams (Mississippi State, Tennessee, Arkansas, Kentucky, LSU, and Ole Miss), with the Tide holding a 6-0 record against them and Auburn at 3-3.  First up, Total Offense: 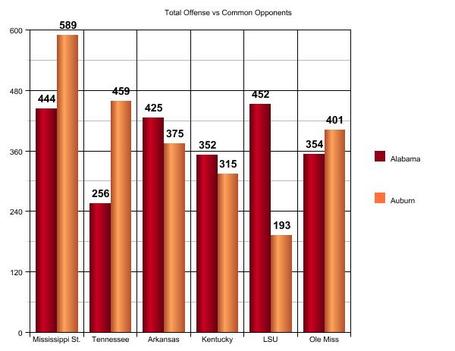 Against opponents that both Alabama and Auburn beat, Auburn holds the advantage in total yards while the Tide ran up more yardage against teams Auburn lost to, especially against LSU.  Not much info to be gleaned here, though, so let's break it down to rushing yardage against common opponents: 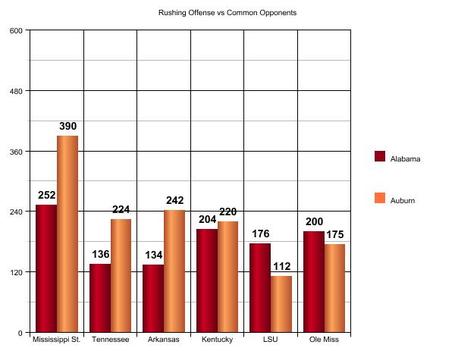 Surprisingly, Alabama managed to outgain Auburn in rushing totals against only two teams, Ole Miss (beaten by both teams) and LSU (beaten by Bama, loss for Auburn).  Just goes to show you how much of Malzahn's offense is run based.  Now let's look at the passing yard: 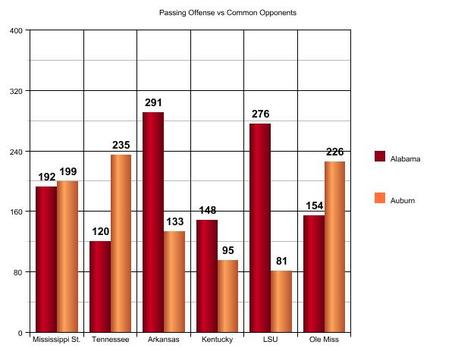 Just like total offense, Auburn holds the advantage against teams both of us beat, while Alabama holds a (fairly substantial) advantage against teams Auburn lost to.  Not a huge surprise there, either, since Auburn's offense clearly struggled in each of those games, but something to keep in mind for Friday.  Chris Todd is not someone who is going to make things happen if a play breaks down, and Auburn doesn't have the best receiver group out there.  Taking away their passing game and forcing the run (which we're pretty good at stopping) seems to be the key to victory there.

Now we get to the fun (for us) charts.  Total defense against common opponents: 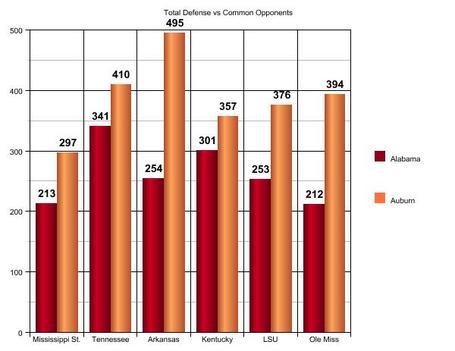 Told you these were going to be fun.  The Tide D has given up over 300 yards only twice against common opponents, while all but one team (State, who got pretty darn close with 297 yds) has managed to gain at least 300 on the Tigers with two teams going over 400 total yards.  Let's see how all those teams are managing to move the ball so effectively.  Is it running the ball? 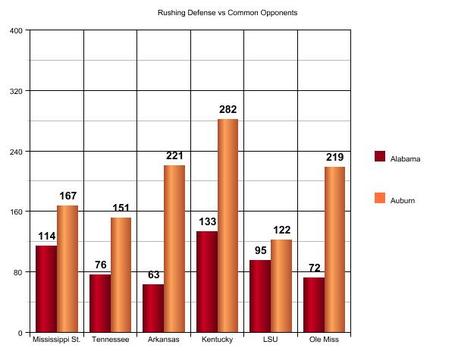 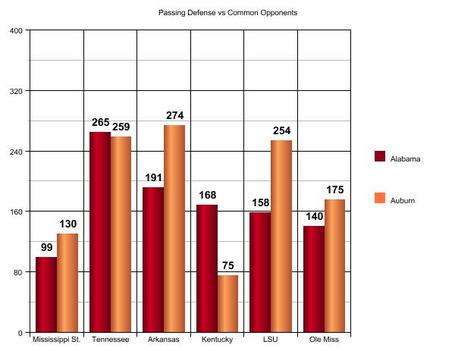 Both Kentucky and Tennessee (Tennessee?) managed more yards passing against the Tide D, but every other common opponent moved the ball through the air for more yardage against Auburn.  Compared with the rushing yardage, I'd say Ingram and Richardson should have pretty good days.

So there you go, not a whole lot of shocking info (Alabama's defense is stout, Malzahn is still good at running an offense) but some food for thought until Friday.