Got (More) Chart If You Want It: Offensive Snaps for Auburn and Alabama

Share All sharing options for: Got (More) Chart If You Want It: Offensive Snaps for Auburn and Alabama

With all the talk of how Malzahn's offense is geared towards extending the game and increasing the number of snaps for his team, I thought I'd go back and look at how that's played out against conference opponents (and did Alabama as well for comparison's sake).  First, though, let's look at Auburn's offensive snaps: 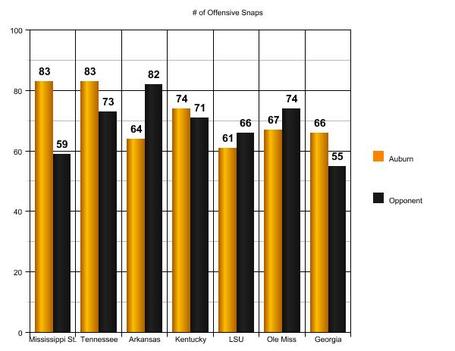 First thing to notice is, during the three game skid against Arkansas, UK, and LSU, only once did they generate more offensive snaps than their opponent (against UK, by only three).  Meanwhile, in every other game save Ole Miss, they were at least +10 in number of offensive plays ran.  And looking closer at the Ole Miss anomaly, the decisive third quarter in which Auburn outscored Ole Miss 23-13 (neither team would score in the 4th), you can see that Auburn doubled Ole Miss in number of plays 24-12 and that one of Ole Miss's scores came on a one play, 79 yard TD drive.  So yeah, extending the game and keeping the offense on the field is a pretty clear priority for the Tigers tomorrow.  But is it one for Alabama?

During the Radio Hour I said that it would be nice if we could flip the script on them and keep their offense off the field while our offense ground their depleted defense into a fine powder with a steady dose of power running and long, physical drives, increasing our number of snaps while limiting theirs.  But looking at the way we've performed so far, I don't know that that's even necessary: 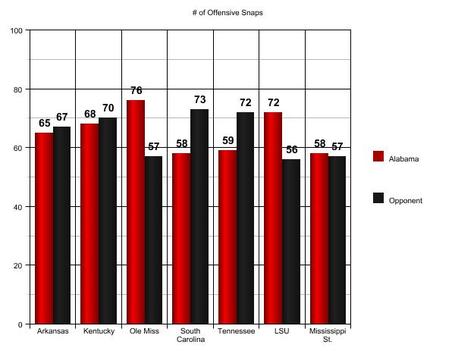 In the seven conference games that we've played, only twice have we significantly out gained an opponent in number of offensive snaps.  The rest of the time we're allowing more snaps by the opponent but still keeping it pretty even or, in the case of one of the worst performances by an Alabama QB since Stallings and the closest game of the season, getting significantly out gained ourselves.  So what should we make of all this?

First, should Auburn succeed in staying on the field and getting more offensive snaps than we do it's not the end of the world.  Our defense has been very good at keeping teams from scoring even when they do have some success at moving the ball (allowing 9.9 ppg, second only to Florida's 9.8, and first in the SEC in Red Zone defense) so, given the fact that you know Malzahn's offense is going to move the ball, getting three and outs would be nice but keeping them from scoring opportunities is much more important.

Second, we don't necessarily have to go toe to toe with them relative to offensive fireworks.  We've talked about Auburn's lack of depth on the defense plenty this week, and so long as we can extend drives and for the most part play our brand of physical football early and often, we can take our time, eat up the clock, and essentially suffocate them.