Another great weekend of college football action, and we have yet another great weekend in meltdown time. Sadly enough with the upset victory of Auburn over Ole Miss we won't be seeing an appearance from Ben Obomanu this week, but nevertheless we've got some great material from Ole Miss, Georgia, Michigan, and USC.

As usual, we've got it all this week... Brent Schaeffer, sandcrabs, illiterate recruits, child abuse, conference changes, testicular sacrifices, Paris fashion designers, plane crashes, prayers for NCAA sanctions, and we finish it all off with a trip to the strip clubs. What can you say? We've got it all here in meltdown.

And, of course, it goes without saying that the language does very rough at times, as all of you should have figured out by now. As is the standard warning each and every week, if you do not like rough language, skip this piece entirely and go on to the next piece here at RBR.

Now, warnings out of the way, it's meltdown time... 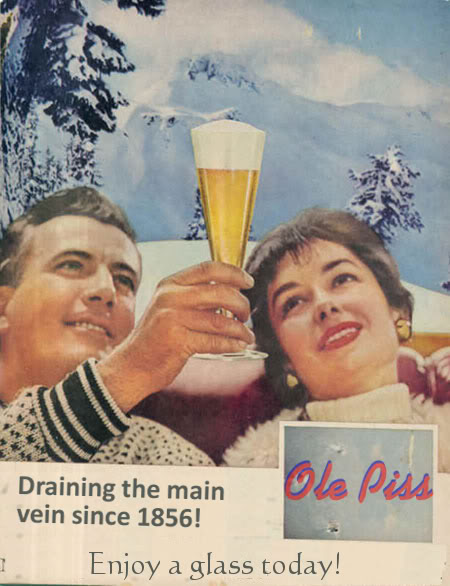 time to get ready for next year and start using your other QB'S.

biggest pretenders in the sec for 47 years

SOWELL IS ATROCIOUS!! absolutely pitiful that he is starting in the SEC.  When the pressure is on he tucks his tail between his legs!

See ya in Shreveport

How many wins are left? Egg bowl not looking so easy now

DEX IS ALLLLLLLLLLL WE GOT!!! NO TALENT BESIDES HIM

I am too depressed to think.

well Rebels we beat ourselves again in classic fashion. Fuck my mouth being an ole miss fan is god damned impossible.

Most disappointing season I've been through

Most of our recruits can't read anyway

Houston Nutt... is he the next Billy Brewer?

Yes, Bradley Sowell has relieved himself of any hype. Thank God, Now you can just be the worthless piece of shit you were meant to be and no one will judge you for it.

30 minutes after the game, players are on Facebook approving friend requests. Just another day in Ole Miss football.

Predictions for attendance for the N. Arizona game? I'm thinking lucky for 45,000.

where do we get Liberty Bowl tickets?

I was just sitting here thinking about how bad our luck is as rebel fans. We are cursed. No matter what players, coaches, or circumstances we have we just can't get to atlanta

We should refuse to play the rest of this season to avoid the embarrassment.

After 8 games we're tied with MSU in the SEC West. Soak that in for a moment.

Why is Massie not playing?  Does he suck?   He can't be any worse tha Sorwell.  Bench Snead.  Give the other QB's a shot.  Maybe that is what he needs.  Recievers cacth the DAMN ball.

all we do is throw to the sidelines..nothing attacking the center of the field. That might work on 64 yard wide CFL fields, but not the 11 yard or so smaller field we play on.

Just not any good. Never will be.

Am I guilty of child abuse?????? Took my 9-year old to Auburn yesterday. He wanted to leave early in the third quarter, but of course I made him stay until Nutt punted with five minutes to go basically conceding the game.

If Auburn doesn't drop 3 easy interceptions,they beat us by 40.

anybody know a good hotel in shreveport? feels like its time to start making our independence bowl plans

After reading these comments I am so glad I passed out after the first half. 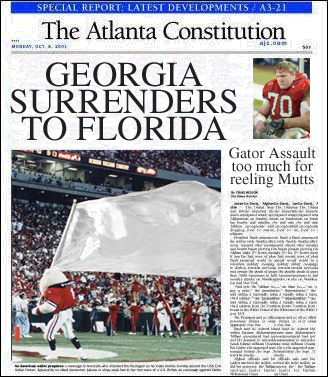 I am taking all my DAWG paraphernalia off my house and autos....I am actually now embarrassed to be a dawg fan

We need to move to the ACC... our style of play fits in well there......lousy football.

We'd probably be better if MR spent as much time preparing his team as he does designing uniforms. Maybe MR should move to Paris and work in the fashion industry.

We shit the bed!

Duke has a better record than us...

It looks as a bunch of Athens drunks drew up this game plan.

Not only can we not beat Florida,,,but we cant even get up enough to protect a UGA legends record....WE ARE fUCKIN PITIFUL..

This fuking mediocrity is killin me,,,we got the talent,but we always play not to lose...even when we're fukin losing

So we go from playing competitive with UF four year ago to getting blasted EVERY fUCKING YEAR. I am sick of this shit.

Peace out. I'm going to go have an accident shaving.

This game, believe it or not was closer than I expected...think i predicted 56-3

Richt made his bones against Fulmer, Shula, Holtz, Gailey and Co.  He used to look like a really good coach. He's overmatched by the new blood of the SEC.

This program has been rotting for a while and Richt allowed it to happen.  We are one of the three worst teams in the SEC, the worst defense in the SEC and the most poorly coached team in the country.

Bring in somebody who forgets to pack the jersey antics on road trips but remembers to pack the can of whoop ass.

We are officially a middle to lower tier SEC east team. I never thought CMR would let us see the Goff days again, but my friends we are there and once again it SUCKS!!!

look at the bright side... maybe nobody recognized us in those uniforms

Really, this is the worst football team we have put on the field since Donnan's first year.

There was no trick.  They've been whipping our asses routinely for 20 years.....

Didn’t the Blackout Beatdown from Bama teach Richt anything about these hokey motivational tricks? Can’t he motivate his team against one of his most bitter rivals without this crap?

Did anybody really expect a better outcome? Black helmets? Give me a break. Dancing because you scored a touchdown even though you are still losing? These kids don’t know how to play football or act with class. I’m extremely dissappointed with everything about this team. How can a program fall so far so fast?

Richt’s best years were with Doonan’s recruits and VanGorder.

I still have vomit in my mouth from watching that game.

We have more 4+star athletes on defense than Alabama and Florida right now. Whats that say about the coaching by WM?

Today, this realization came to me with equal clarity and certainty: The current Georgia coaching staff will never beat the current Florida coaching staff. One or the other must change before we will ever win in Jacksonville again.

Is it true that Rambo barely even played? WTF? Did he sleep with Martinez’ wife or something?

Every gain the Georgia program has made since 2001 has been lost. We are now where we were in the 1990s. The glory run is over and we are back to square one.

New uniforms? Way to rearrange the deck chairs on the Titanic, Richt. 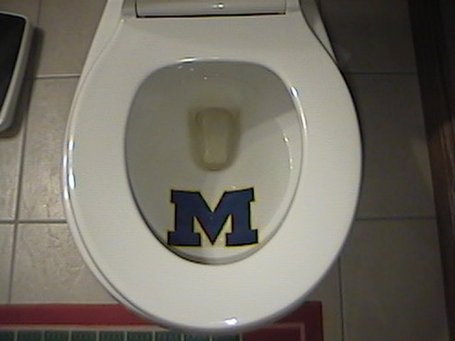 The god-damned plane has crashed into the mountain.

This team can't beat anyone except a DII school

I'm trying to stay positive, but there is NO WAY we compete with osu this year. We will most likely lost by 30+ pts, I see pryor having a BIG day in the Big House in three weeks

Cant beat the worsr team, you become the worse team!

Does anyone have Les Miles cell phone number? If so give it to the AD

Just think how shitty we'd be without all that extra practice?

Goodbye RR. I can't say it was fun.

Can RichRod fire himself by next weekend?

We are witnessing the implosion I'm afraid.

What do you say to a recruit after an ass whooping like this?

RR should hope open tryouts Monday. Every position on the roster is up for grabs, except Brandon Graham.  If you can outplay a current member of the team you get their scholarship.  Expect a bunch of roster changes next week

the almighty rich rod offense goes three and out or fumble 80% of the time. he's had TWENTY ONE games now to get it going. it still looks like crap.

Brace yourselves, 5-7 is the probable outcome.

We don't have what it takes to beat Purdue and will certainly lose or get blown out entirely by Wisco and OSU.

I can't believe I'm posting this, since thought 9-3.

But good grief....we are done.

I am now actually hoping that the NCAA finds violations so we can have an excuse to get rid or RR..... How bad is that? 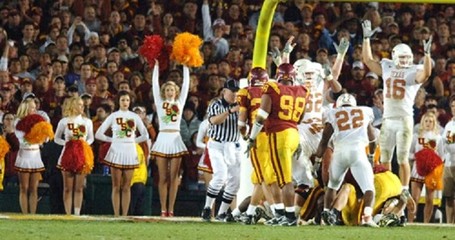 The game play at USC has fallen off to a laughable level. Intolerable calls against the offense, untimely and unintelligent calls against the defense have moved the Trojans to a second tier football program. No intensity at any level, coupled with no intelligent gameplay makes for a pretty embarrassing team effort.

Who will we play in the Holiday Bowl?

Bend Me Over And Stick It In

It's Halloween, but who were those guys in the SC uniforms?

No Guts, No Pride, No Heart. That looked like a Paul Hackett coached team tonight.

What's most shameful is how the team just totally quit. I never thought I'd see a USC team under PC quit on the field ,but this team did. Truly Embarrassing.

Watershed loss of the PC era.

WOW Hide the dog. I'm gonna kick the shit out of him.

Maybe the computer polls saw through us... while the human polls were giving us undue credit just for being USC.

never thought Id see a Pete carroll coached team give it up like bitches like that. Maybe Pete ought to let the gang bangers of better la worry about themselves and get back to work fixing this USC football program

No, we were done in tonight by our team not giving a DAMN if they won or lost, and our opponent playing for the National Championship.

RECRUITS JUST DECOMMITTED. This was our GAME to SHINE, and we fucked it up. Right now at this very moment, recruits are in the DUCKS locker room celebrating our DISGRACEFUL PERFORMANCE.

watch our recruiting fall off the charts after this - there is no way henderson, powell, shaw, lache, etc come here after this - we could even get beaten by Stanford at this rate

THE EMPEROR HAS NO CLOTHES - pete can recruit and motivate-he cannot coach period !!!

If we ever want to get back into the NC game again fans like us must implore pete to change things !! we looked like Florida state tonight and PC looked like bobby bowden!!

With all the bandwagon fans jumping ship, tickets to the remaining home games will be dirt cheap now for the rest of us.

Problem is that was said after 13-9, the Stanford debacle, the two OSU screw-ups and the Washington blunder. Nothing has changed or is going to will Pete is at the helm.

Absolutely heartless. From Tyron Smith deciding not to block anyone, to Parsons' constant false starts, to Morgan getting dragged like a rag doll as usual against midget RB's, to Galippo playing like an out of position idiot with no idea where to be, to Taylor "overrated" Mays. The entire team, coaching staff, and program should be absolutely ashamed of itself. I'm so sick of this team.

The bad thing is Oregon could be even better next year.

This is the worst defense effort I've seen since the 1966 Notre Dame game.

Forgot what the woodshed looked like. Not a pleasant place.