Random Thought: SEC Teams That Aren't Yet Bowl Eligible (and Random Teams that Are)

Share All sharing options for: Random Thought: SEC Teams That Aren't Yet Bowl Eligible (and Random Teams that Are)

While I was putting my blogpoll ballot together I was looking at the conference standings page over at Yahoo! Sports to get a look at the records of various mid-majors, and something jumped out at me about the SEC; half the conference is still looking to reach .500 with only three games left in the season: 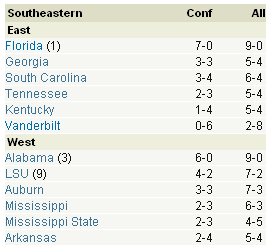 Raise your hand if you thought before the season started that at this point Auburn would be bowl eligible while Georgia, with Auburn, Kentucky, and Georgia Tech left on the schedule, isn't necessarily a lock for the post season.  If there's anyone out there with their hand raised, you are either an Auburn homer or your pants are exceptionally hot right now, liar.  Anyway, Vandy is the only team that is mathematically elminated from a bowl game, but there are a few teams on the outside looking in that are unfortunately going to stay that way.  Mississippi State is probably out (needing two wins out of Alabama, Arkansas, and Ole Miss), while poor Vandy is likely the whipping boy that can catapult both Kentucky and Tennessee into bowl eligibility.  Meanwhile in the West, poor State will likely be the team that gets both Arkansas and Ole Miss (who, despite being 6-3, still needs another win since they played two 1AA teams this season and only one of those wins can count towards bowl eligibility) into the postseason.  None of this is a given, though.  State is no pushover and I wouldn't be at all shocked if they upset Ole Miss.  Should the Rebels end the season on a three game skid (which is possible with Tennessee, who is starting to really click right now, and LSU still on the schedule), Ole Miss will be sitting home for the holidays.  Meanwhile in the East, Georgia better bring everything they have the rest of the way since even Kentucky is a threat to take them down.  Just goes to show that the SEC is quickly becoming a conference with a two to three team "elite" level (this year, Alabama, Florida, and LSU) and a seriously logjammed middle.  We're possibly looking at sending two teams to the BCS, one double digit win team to the Outback, and a whole bunch of 6 and 7 win teams everywhere else.

Looking elsewhere, though, it's amusing to note some of the teams that have quietly gone about reaching .500: