An Interview with Corky Simpson

Share All sharing options for: An Interview with Corky Simpson 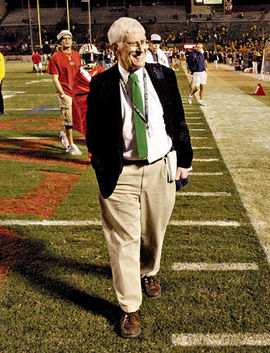 Back in 1992 as the college football season was gearing up to get started, Corky Simpson was the only person outside of  Alabama that believed in the Crimson Tide.

The sportswriter for the Tucson Citizen in Arizona was the lone AP poll voter whose pre-season ballot listed Alabama as the number one team in the nation.

And over the course of that amazing season, he was determined to keep them No. 1 as long as they kept winning – a decision he now admits was motivated as much by stubbornness as anything else.

Simpson was more than vindicated when Gene Stalling's Crimson Tide squad upset the heavily favored University of Miami Hurricanes in the 1993 Sugar Bowl to claim the National Championship.

He instantly became a legend in Alabama but he was already a legend in Arizona sports circles. He was named national sportswriter of the year by the AP in 1988 and he eventually became the inaugural member of the Arizona Associated Press Sports Editors Hall of Fame.

Simpson penned his final column for The Citizen in 2006 (the paper folded earlier this year) and retired. He still writes an occasional piece for The Green Valley News, a small paper serving the Tucson suburb where he lives.

Simpson was kind enough to talk with us recently about his strange footnote to the ’92 championship season and give us his thoughts on this year’s team as well...

Roll Bama Roll: You know you are a dead set legend in Alabama, don’t you?
Corky Simpson: I am very fond of Alabama. I love the place and I love the fans. And the food is pretty good too. There is a place there [The Cypress Inn] that has the best catfish in the country.

RBR: Why did you choose to pick Alabama as the No. 1 team before the ’92 season?
CS: I has spoken with Bill Lumpkin [sports editor of the now defunct Birmingham Post-Herald] at a meeting before the season and he said Alabama had a pretty good team. I checked up on that and the more I found out the better I liked them.

RBR: What did people say about your putting them in the top spot?
CS: Nobody knew at first since the voter’s names weren’t released. But it got out and someone did a story [Mark Edwards of the Decatur Daily] and then my phone started ringing off the hook.

RBR: What was the response then?
CS: I got some interesting correspondence from the University of Miami. I got called "inherently evil" and one guy sent me a fax of his butt.

RBR: Did you expect the reaction you got from Alabama fans when the team won the national championship?
CS: It was amazing. Alabama has some of the best fans in the country.

RBR: Who did you vote for the next season?
CS: After that I quit doing the AP poll. I told them I was going to retire undefeated and I did. But since those days the Harris poll has come up and I’m kind of into it again.

RBR: Did you put Alabama at No. 1 this year?
CS: I didn’t move Alabama to No. 1 until sometime in mid-November I think. I believe I actually started out with Florida in the top spot but was thinking it would be Texas most of the season. [Alabama is at No. 1 on Simpson's final ballot of the season.]

RBR: What do you think about this year’s Alabama squad?
CS: I think that Coach Saban has a tremendous team, no doubt about it. There is just a tremendous amount of talent there.

RBR: A lot of Alabama fans think this year’s squad is similar to the ’92 version. Do you agree?
CS: I don’t think they are really comparable. The ’92 team was more of a "blue collar" team, this is more of a "blue chip" team. There are so many wonderful specialists. Alabama has five or six really good NFL players on the roster and they didn’t have that in ‘92. One thing’s for sure. I would put Bama’s heart in ‘92 up against any team that ever played.

RBR: If Alabama wins the National Championship, will it be the same type of accomplishment it was 16 years ago?
CS: I think it is a different game really. The sport has changed so much. There is a parity out there today you didn’t have in 1990s and what that means is everyone can beat anybody. It’s much harder to go through a season undefeated like it was back then due to that.

RBR: So who do you think is going to win the National Championship on Jan. 7?
CS: I think Alabama can win it but it’s going to be close. Texas has one hell of a team and they are going to show up ready to play.