In the long history of the Alabama and Texas football programs, the two teams have met just eight times on the gridiron. Over the next two weeks Roll Bama Roll will look back on each of these contests. Today we revisit the final time the two met in a regular season game on Oct. 28, 1922 in Austin, Texas. 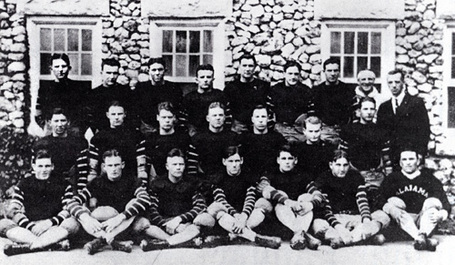 Alabama and Texas met in 1922 as both programs were beginning a period of dominance. In Austin, things got moving when Athletic Director, L. Theo Bellmont tapped acting intramurals director Berry M. Whitaker to lead the football team in 1920.

It proved to be a shrewd choice as the unassuming coach proceeded to guide the Longhorns to a 9-0 record and the Southwest Conference Championship. Going into the 1922 season, the team looked ready to pick up where they left off the year before.

Alabama’s president George Denny made a similar unorthodox selection when he chose a sportswriter from Cincinnati, Xen Scott, as the Crimson Tide head coach. Despite his regular vocation, Scott had a decade of experience coaching at schools across Ohio before The Capstone called. He had earned a reputation as an offensive guru well versed in the open style of Midwest ball.

Arriving in Tuscaloosa, Scott wasted no time molding the team into a powerhouse. The 1919 team racked up an 8-1 record - the best in school history - and outscored opponents a staggering 280-22. The next year saw Alabama achieve its first 10-win season and the whole school "had gone football mad."

Riding that wave of goodwill, Scott was heralded as "the best and brainiest coach in the South" by the Crimson White but the tune changed after a rough 1921 campaign.

A mediocre 5-4-2 record earned the season that never pleasant label "rebuilding year" and if not for a Thanksgiving Day upset win over Tulane, it was likely Scott would have been dismissed.

The 1922 season got off to an explosive start as Alabama positively annihilated Marion Institute 110-0 -- a score that still stands in the Alabama record book as the largest margin of victory and points scored in a single game.

But the Crimson Tide came down to earth on Oct. 14 when they traveled to Atlanta to face Georgia Tech. The Golden Tornadoes, as Tech was commonly known in that era, delivered a 33-7 beatdown on the Crimson Tide. A week later Alabama had it's hands full with Sewanee and escaped with a 7-7 draw.

Then began a grueling 2,885 mile two-game road trip that started with the contest against the Longhorns in Austin. Scott did his best to make sure his team was ready and his staff boasted W.T. "Bully" Van de Graff who had personal experience with the Longhorns after playing on the 1915 squad.

The Texans were still stinging from a 20-0 loss to Vanderbilt in Dallas Texas the week prior. When the Crimson Tide arrived at Clark Field in Austin on Oct. 28, the idea of another Southern school beating them in the Lone Star State didn't sit well at all.

Alabama started the game strong with Charles Bartlett intercepting a pass on the Texas 33-yard-line two minutes into the contest. Three plays later he grabbed a pass from W.C. Baty and scored - the first time the Crimson Tide had managed to cross the goal line in the history of the series.

Fate turned cruel later in the first period as Baty fumbled a punt and Texas recovered on the Alabama 30-yard-line. The Longhorns made it on fourth down and, on the next play, Ivan Robertson completed a pass to George Gardere for the score.

Later in the second period Texas capitalized on a short punt and drove to the one-foot-line. Culp took the hand-off and blasted into the end zone giving the Orange and White the lead.

Alabama's hard luck continued after halftime as the first drive stalled and they turned the ball over on downs at the Texas 33-yard-line. While the Crimson Tide defense was able to hold on following a 30-yard-gallop by Robertson, the Longhorns added a field goal to their tally.

Alabama threatened to score one final time in the fourth quarter but a pass from Bartlet to end Al Clemens failed by inches and they had to settle for a field goal. The final score was 19-10.

In the end, the Crimson Tide couldn't overcome it's own mistakes, fumbling the ball seven times during the game with Texas recovering the ball no less than five times.

For Texas, the game would be one of the highlights of the season. The Longhorns would finish with a 7-2 record including an ignominious loss to arch-rival Texas A&M on Thanksgiving Day.

That contest would serve as the final game for Whitaker who stepped down as head coach with a 22-3-1 record. He returned to his duties as the school’s intramural director – a post he held for the next 40 years. He was inducted into the Longhorn Hall of Honor in 1977.

Alabama left Austin and traveled to Pittsburgh to face the powerful University of Pennsylvania coached by the legendary John W. Heisman. Scott’s charges beat the Quakers 9-7 in a stunning upset. It was the Crimson Tide’s first victory over a nationally recognized football program. Thousands of fans greeted the victors at the Tuscaloosa Train Depot when the team arrived back home.

Scott stepped down as coach at the end of the season due to health problems that would claim his life two years later. But the foundations he established in the Alabama program would allow his successor, Wallace Wade, to go onto claim the school’s first national championship in the 1926 Rose Bowl.