Share All sharing options for: RBR at the Movies: Harvard Beats Yale 29-29

"RBR at the Movies" is a new feature I've cooked up to help get us through the offseason and/or bye weeks/slow news days, etc. I know we have the biggest game for our program in nearly two decades coming up in a few weeks, but right now things have slowed a little bit. Ingram's won the Heisman, but the team isn't practicing, and we're still several days away from the first bowl games, so I figured I'd go ahead and throw one of these out here. Anyway, consider this column the cinematic version of Kleph's RBR Reading Room. I'm primarily going to cover football movies at first, but really any sports movies are up for review. To kick things off (no pun intended), a documentary... 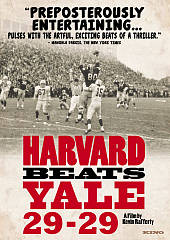 When I first saw the black & white image and the title Harvard Beats Yale 29-29, I assumed it was going to refer to some bizarre incident where the game was decided by the flipping of a coin because it was getting too dark for the game to continue or something like that.

It turns out that that couldn't be further from the truth. Thecontest in question is from November 23, 1968 and featured both teams coming into the rivalry game undefeated. Despite both teams having perfect records, Yale was favored in the game as they'd cruised through most of their schedule that season; a 25-13 win at Cornell being the closest they came to defeat. Harvard on the other hand had some close calls: a 9-7 win at Princeton and a few other games that were only decided by a touchdown. Harvard were considered to be overachievers in 1968.

Though the production value of the documentary feels a bit low at times (interviews being done in people's kitchens with coffee makers, etc. in the background instead of a simple studio setup) the story itself is fascinating. First of all, Tommy Lee Jones played in the game, so that had my curiosity factor up right off the bat. Add to that these interesting side stories and you've got a compelling story on your hands: one of the Yale players was a roommate of George W. Bush, another Yale player was dating Meryl Streep at the time of the game, a bunch of the Harvard guys were friends with Al Gore and it turns out that Gary Trudeau of Doonesbury fame based the character of B.D. on Yale quarterback Brian Dowling who was captain of their squad in 1968. It's also interesting the way the Vietnam war and the politics of the era play into the retelling of the game. Some of the players were anti-war protestors while some of their teammates were veterans of the same war being protested.

The film interweaves modern day interviews with the players with highlights from the 1968 contest. Storylines with various players are developed and just like a Hollywood movie, there are protagonists and villians. One need not be a fan of either team to enjoy this documentary. Even though Ivy League football is an afterthought in our day and age (as it largely was when this game occurred...only one player off of the two squads became a professional), these two former powerhouses are fierce rivals and that's never going to be diminished regardless of what caliber the overall quality of the teams is. Despite many of them being New England old money, these guys had a passion for their team and a true hatred of their opponent, which is really the recipe for any great rivalry. That's something we can all relate to and ultimately what makes this film successful.