Share All sharing options for: Alabama vs Texas: 1948 Sugar Bowl

In the long history of the Alabama and Texas football programs, the two teams have met just eight times on the gridiron. This week Roll Bama Roll is looking back on each of these contests. Today we revisit the first bowl game featuring these two storied programs: The 1948 Sugar Bowl. 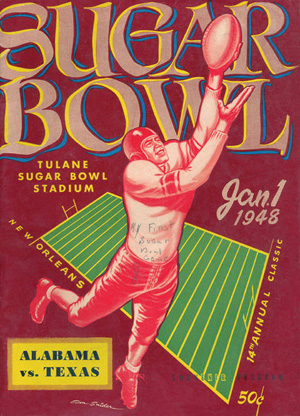 When Alabama and Texas met in the 1948 Sugar Bowl it was the first time the two programs had faced each other in more than a quarter century. Since their last meeting both teams had grown to become the preeminent powers in their conferences and well-respected on the national level.

Yet in 1947 both teams were in a season of transition. In Austin, legendary coach Dana X. Bible had stepped down after a dominating nine-year run on the sideline (although he stayed on at UT's athletic director). His handpicked successor was Blair Cherry who was the first Texas-born coach of the Longhorns.

It proved to be the right decision; Cherry’s 1947 squad was a powerhouse. The ripped off a dominating 9-1 record during the regular season, falling only in a hard fought 14-13 battle with SMU squad led by All-American Doak Walker. They were ranked No. 5 as they prepared to head to New Orleans for the Sugar Bowl.

Alabama was also struggling with a difficult coaching change. The team’s longtime coach Frank Thomas was forced to step down at the end of 1946 due to health problems. In his final season the Crimson Tide had been undefeated and capped the season with a resounding 34-14 victory against USC in the Rose Bowl.

One of Thomas' former assistants, Harold "Red" Drew, was tapped for the head coach slot. Drew had left Alabama for Ole Miss in 1946 and lead the Rebels to a lackluster 2-7. His first season at the Capstone had gone considerably better. The Crimson Tide racked up an 8-3 regular season record and finished ranked No. 6. 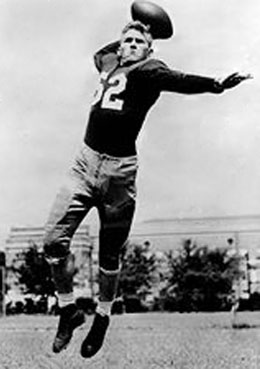 One reason both Cherry and Drew were able to do so well their first year was that both teams boasted an All-American player whose exploits were already on the verge of legendary. For Alabama it was halfback Harry Gilmer and for Texas it was Bobby Layne.

Today, Gilmer is considered one of the best all-around four-year players ever to play at Alabama. He is among the top five winningest quarterbacks in the school's history and his school record 52 career touchdowns was finally eclipsed last year by Jon Parker Wilson's 58.

Gilmer’s trademark was a distinctive leaping throw where he would jump two or three feet in the air and hurl the ball downfield over the heads of the incoming tackler. Despite the unorthodox method, he was deadly accurate in his delivery. In his career at Alabama he passed for 2,894 yards and 26 touchdowns (rushing 1,673 yards and 24 touchdowns).

In addition, he was a force on defense - recording 16 career interceptions, half in 1946 alone - and he was a monster on special teams. His 1,119 punt returns yards has only been bested by Javier Arenas. His 92 yard return against LSU in the 1947 season remains tied as the longest in school history.

Texas’ Layne was putting the finishing touches on just as amazing a collegiate career in Austin. Considered the first great T-formation quarterback in the Southwest, the "Gadabout Gladiator" was a larger-than-life personality off the field with an unmatched talent for taking over games on it. He wound up his time in Austin with a school record 3,145 passing yards on 210 completions and 400 attempts.

Interestingly, two weeks before the two were to meet on the gridiron, Gilmer edged out Layne in the 1948 NFL draft when the Washington Redskins grabbed him in the No. 1 slot. Layne was taken two picks later by the Chicago Bears.

So on New Year’s Day 1948, more than 73,000 fans packed into Tulane Stadium in New Orleans expecting to see the two legendary backs give it their all in their final collegiate game. Instead, it turned out to be a defensive struggle from start to finish with errors on the part of the Alabama squad being the difference in the matter. 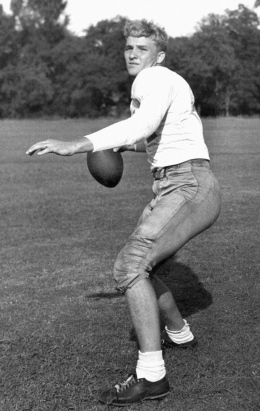 Texas struck first when Layne completed a 4-yard pass to Ralph Blount in the end zone. Alabama was able to even the score right before the half when Gilmer completed an 8-yard pass to Ed White for a touchdown.

The second half resumed the defensive struggle and Texas was able to force Alabama to punt deep in its own territory. As Norman Mosely took the snap, the entire left side of the Longhorn line swarmed into the backfield. Longhorn left tackle George Petrovich blocked the punt and guard Victor Vasicek recovered in the end zone for the score.

Things continued to go against the tide in the fourth quarter as Texas’ Lewis Holder intercepted a Gilmer pass and ran it 18-yards for a touchdown. Then, late in the fourth quarter, Alabama fumbled the ball deep in its own territory. Texas quickly reached the one yard line and Layne himself scored on a quarterback sneak up the middle.

When the final whistle sounded, Texas possessed a decisive 27-7 win in the first bowl matchup between the two teams. The Crimson Tide had been held to just 103 yards of offense, its third worst showing ever in a bowl.

The Crimson Tide had just seven first downs all afternoon. The run game could only manage  41 yards on 28 attempts and Gilmer had an anemic 3 completions out of 11 attempts for 45 yards.

Texas’ Layne, by contrast, completed 10 of 24 for 183 yards and rushed 12 times for 51 yards. His performance earned him the Miller Trophy as the Sugar Bowl’s most valuable player, the final honor in a collegiate career studded with them.

After the game, Cherry signed a three-year contract but he resigned at the end of the 1950 season to go into private business. Drew stayed on as coach of the Crimson Tide until 1954, rolling up a 53-28-7 record at the school.

Layne went onto the NFL where the hard-living Texan bounced around various teams until 1950 when he joined his old friend and SMU standout Doak Walker in Detroit with the Lions.

Together the two boys from Highland Park High School in Dallas brought the franchise into its glory years. With Layne under center, the Lions won the NFL championship in 1952 and 1953. Both Layne and Walker were eventually enshrined in the Pro Football Hall of fame.

In 1954 Gilmer was traded by the Redskins and joined his Sugar Bowl foe on the Lions roster. He played for two more years before entering the coaching ranks and he returned to Detroit as head coach in 1965 and 1966.