Share All sharing options for: Remember Mark Ingram, the recruit?

With all of the attention and publicity given to Mark Ingram the past several weeks during the Heisman race, personally I kept thinking back to two years ago when Ingram was a recruit coming out of Flint's Southwestern Academy. If you will recall correctly, despite having a pretty impressive offer list -- Ingram had offers from just about all of the Big Ten schools sans Ohio State and Michigan, plus other offers from the likes of Alabama, South Florida, Arizona State, and others -- Ingram wasn't a particularly highly-rated recruit.

Of the two major recruiting services, Rivals had the more generous evaluation of the two, pegging Ingram as a four-star recruit and the #17 athlete prospect in the country. Of course, though, even with that in mind, it's not like Rivals was particularly sold on Ingram. He was by no means considered an elite recruit -- they had him as the #189 overall prospect in the country -- and the mere fact that they evaluated him as an athlete tells you that they weren't particularly sold on the prospect of him even being a tailback at the next level. They weren't even certain that he wouldn't play linebacker or safety in college.

As for Scout.com, they were even more critical. I'll just let a quick screenshot of his profile tell the tale: 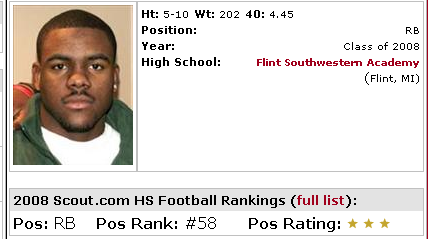 You are reading that right... a three-star tailback and the #58 tailback prospect in the country. And, believe it or not, that was actually after the supposed "experts" over at Scout.com dramatically increasing his rating in their final update in mid-December of 2007. Prior to that rating increase, Scout.com actually had Ingram rated as the #94 running back prospect in the country.

Even after that late bump, Scout.com still ended up with several, shall we say, interesting players rated higher than Ingram. Jerico Nelson, for example, now a defensive back at Arkansas, was rated higher as a tailback prospect than Ingram. The same thing goes for two prospects who signed with Georgia Southern and McNeese State (Franklin Green and Alonzo Landry, respectively). Auburn, in fact, despite having a terrible recruiting class, actually signed three different tailback prospects that Scout.com had rated higher than Ingram (Onterio McCalebb, Eric Smith, and Reggie Hunt) and would have had four had Enrique Davis not spurned the Tigers late in the process for Ole Miss. Scout.com also had fellow Alabama signee Chris Jordan rated significantly higher at tailback than Ingram, despite the fact that we largely recruited Jordan to play linebacker. And that is, of course, to say nothing of the prospects rated higher that have already turned out to be busts at the collegiate level, such as the likes of Darrell Scott, Aundre Dean, and Sam McGuffie.

But, in hindsight, is it fair to say that Ingram was one of those guys who just flew in under the radar, and one whose success, for whatever reason, could not have been reasonably expected? The answer to that question is clearly no. Looking back on Ingram as a prep prospect, everything in his background would objectively portend that he was destined to do big things at the next level.

To begin with, the raw production was certainly there as a prep prospect. He was a four-year varsity starter in Michigan's highest and most competitive football classification -- three years at Grand Blanc and his senior year at Southwestern -- and was never anything short of outright prolific. For his career he ended up with over 5,000 total yards and 65 touchdowns, and as a senior he even starred on defense to the effect of 30+ tackles and three interceptions. He was also the prototypical build to play the tailback position, and he clearly had speed to burn, as he showcased by running a 4.38 at a Michigan State camp, and by him being a nine time all-state selection in track. And, to boot, he was physically ready to play from day one, was a fine student in the classroom, and had no character issues. Furthermore, he even had the NFL lineage... his father was a former first round draft pick who played ten years in the NFL, and whose resume included a Super Bowl victory where he made one of the most memorable plays of the game.

So what more could you really ask for a recruit coming out of the prep level? Physically ready? Check. Long time starter? Check. Produced at high levels against very good competition? Check. All-state player? Check. Lots of sheer speed and athleticism? Check. Proper physical build to play his position? Check. A good student in the classroom? Check. A good character person off the field? Check. NFL lineage? Check. Impressive offer list? Check. If you were looking to objectively evaluate prospects, what more could you really want?

Yet, nevertheless, somehow, the #58 tailback prospect in the country.

I think what Ingram's "evaluation" -- as if that's not a joke in its own right -- really tells you is not so much about Ingram as much as it tells you about the supposed "experts" doing the evaluations. Specifically, it tells you that the "experts" are in many cases so utterly unqualified and incapable of doing what they purport to do that at times they literally cannot read the writing on the wall, and that many times outside factors that should have no effect whatsoever on a recruit's ultimate rating do in fact have an impact after all. The scary thing about situations like this is that they are probably more common than you would think. Ingram may be a bit of an anomaly, but not much of one.

Now, to be clear, that's not to say that recruiting rankings don't matter, because they clearly do. On in the individual level you tend to rate highly those prospects who are heavily recruited by the top programs -- offer lists, and not actual evaluations, are the biggest determining factor in how a recruit is ultimately rated -- and in the aggregate you rank teams based on how many of those prospects that they sign. And, thus, not too surprisingly, in the aggregate the recruiting rankings hold. You do see some teams significantly underachieve and overachieve, but generally speaking the teams that win on National Signing Day ultimately win on those Autumn Saturdays, and vice versa.

But though that is generally true for recruiting rankings as a whole, on the individual level, individual ratings are largely a crapshoot. It's a common occurrence to see the five-star be a complete and total bust, all the while the lowly-rated three-star turns into a bona fide star player. Keep that in mind we sign another middling three-star prospect. And when we sign another can't-miss five-star.