Share All sharing options for: Alabama vs Texas: 1960 Bluebonnet Bowl

In the long history of the Alabama and Texas football programs, the two teams have met just eight times on the gridiron. This week Roll Bama Roll is looking back on each of these contests. Today we revisit the 1960 Bluebonnet Bowl in Houston, Texas. 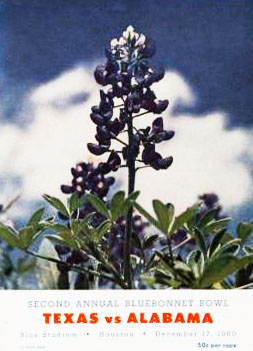 The 1960 Bluebonnet Bowl marked the meeting of two coaches that would become synonymous with the success of their respective football programs, Texas’ Darrell K Royal and Alabama’s Paul W. Bryant. Yet much of that success was still in the future since both men were still laboring to pull their teams out from the worst stretches of their long and storied histories.

In the mid-1950s, the Texas football program had fallen on hard times. Three straight losing seasons had culminated in 1956 with a 1-9 debacle that stands as the worst record in the school’s history. Head coach Ed Price resigned and Athletic Director Dana X Bible then hand-picked the 32-year-old Royal to take the reins of the Longhorns.

Royal had been a quarterback at Oklahoma under the legendary Bud Wilkinson during the 1940s. He then entered the coaching ranks and served as head coach at Mississippi State and Washington before coming to Texas. He immediately led Texas back to prominence in 1957 with a 6-4-1 record, a No. 11 national ranking and a berth in the Sugar Bowl.

The story was similar in Tuscaloosa. In the span of just three years Jennings B. "Ears" Whitworth, a former Crimson Tide lineman, had pretty much run the program into the ground.

In 1955 he began his tenure by benching all of the seniors - including quarterback Bart Starr - and lead Alabama to an abysmal 0-10 record. A pair of 2-7-1 campaigns followed capped with a 0-40 faceplant against Auburn on Nov. 30, 1957 led to Wentworth's firing.

Then mama picked up the phone.

By the end of the 1950s, Bryant had become known as a miracle worker for down-and-out programs. He had turned Maryland and Kentucky into winners and was busy doing the same at Texas A&M. In November 1957, the Aggies were on an eight-game win streak when news broke Bryant was going to return to Alabama.

The A&M squad was crushed and they went into a tailspin, losing the final three games of the season. One of those teams was Texas. Thus Bryant and Royal faced each other on opposite sidelines for the first time on Thanksgiving Day 1957 with the Longhorns besting the Aggies 9-7 in College Station.

Arriving in Tuscaloosa, Bryant wasted little time turning around the program leading the Crimson Tide to their first winning season since 1953. The next year they racked up a 7-2-2 record and climbed as high as No. 10 in the AP poll.

Alabama seemed to pick up where they left off as the 1960 season started. Beginning with a victory over SEC Champions Georgia to open the season and a dramatic 16-15 win over Bobby Dodd's Georgia Tech squad on Nov. 12 that prompted Coach Bryant to give his famous "We've got 'em right where we want 'em!" halftime speech.

At the end of the regular season Alabama boasted an 8-1-1 record, a No. 9 ranking and an invitation to the second annual Bluebonnet Bowl in Houston. Royal’s Longhorns had amassed a 7-3 record and were unranked heading into the Bayou City.

More than 68,000 fans gathered under sunny skies and slightly chilly temperatures in Rice Stadium on Dec. 17 to see the bowl rematch between the two programs. Once again, it was a battle of defenses with  both teams struggling for whatever points they could get. 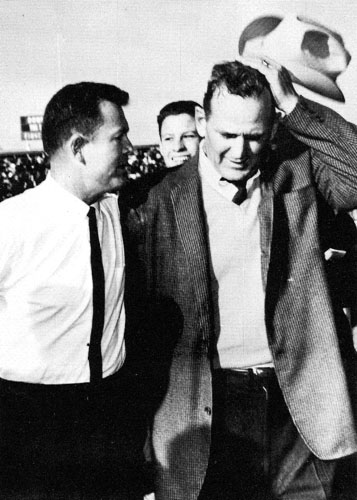 Royal and Bryant at the end of the game.

As the first quarter wound to an end, Alabama’s Bill Rice broke off a 49-yard one to the Texas seven-yard line. On third down, Crimson Tide QB Bobby Skelton cut in at tackle and dove for the goal line. The officials ruled he was stopped at the one.

Bryant ordered another run on fourth down and the Longhorn defense stopped fullback Bobby Richardson inches from the line. It proved to be a costly missed opportunity.

It wasn’t until midway in the third quarter before points were put on the board when Alabama’s Tommy Booker completed a 30-yard field goal. Texas finally matched that late in the fourth quarter with a 20-yard field goal that capped off a 13-play, 71-yard drive.

And the Longhorns weren’t quite done for the afternoon. Getting the ball on their own 48-yard-line with just 28 seconds left Texas' quarterback Johnny Genung went for the winning score and slung  a deep pass only to see it broken up by the Alabama secondary.

On the next play, the Longhorns took to the air again but the pass went incomplete as Alabama's Leon Fuller and Texas' Bob Moses jumped up and battled for it.

And while time had expired on the play the game wasn't over. Fuller was flagged for interference and Texas was awarded one more play. With the ball on the Alabama 18, Petty tried for the game winner but booted it wide left. The game ended in a 3-3 tie.

After the game Royal was sanguine about the outcome.

"Naturally, we were all hoping that last kick by Petty would go through but it would have been a shame to win that way," he said. "I think the score was indicative of the competitive nature of the two teams."