Share All sharing options for: Alabama vs Texas: 1965 Orange Bowl

In the long history of the Alabama and Texas football programs, the two teams have met just eight times on the gridiron. This week Roll Bama Roll is looking back on each of these contests. Today we revisit the 1965 Orange Bowl in Miami, Florida. 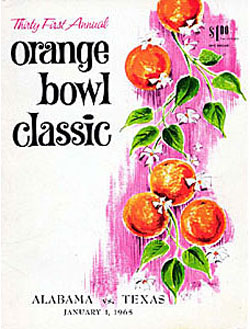 Just five years after their last meeting, Texas and Alabama squared up against each other in the 1965 Orange Bowl – a game that matched up two of the nation's most storied football programs at the peak of their powers.

By 1964, Alabama's legendary head coach Paul W. Bryant had succeeded in building a foundation of a winning program in Tuscaloosa and has begun working on earnest on his legacy. In 1961, Alabama team earned the SEC and National Championships after rolling undefeated through the regular season. They then capped the achievement with a 10-3 victory over Arkansas in the 1962 Sugar Bowl.

The following season, a young firebrand from Beaver Falls, Pennsylvania joined the team and started lighting up the offense. It wasn't long before folks around the SEC knew the name Joe Namath although folks in Alabama just called him "Joe Willie."

Yet regaining the peak attained in 1961 eluded the program. Three losses over the span of the next 22 games kept the Crimson Tide from re-achieving such lofty heights in 1962 and 1963 but hopes were high as the 1964 season got rolling.

Through the first month of the season, everything seemed to be going according to plan as Alabama rolled up the wins. But things turned grim on Oct. 10 in a game against NC State in Tuscaloosa.

Midway through the second quarter, Namath was flushed from the pocket with no open receivers. He scrambled toward the sideline and started to cut upfield... then simply collapsed in a heap, completely untouched.

Namath had slipped on the turf, twisted his right knee and suffered ligament and cartilage damage. Backup Steve Sloan took over the starter slot for the rest of the season although Namath was put back in when a key game was on the line - pulling out victories against Georgia Tech and Auburn.

Although he was still a dangerous passing threat, Namath was clearly limited due to the injury and always in considerable pain.

But Alabama kept on winning and climbing up the polls. By mid-November they were ranked No. 2 behind Notre Dame. When the Irish were upset by USC 20-17 in Los Angeles on Nov. 28 both the Associated Press and UPI selected Alabama as the 1964 National Champions.

In Austin, the season had been more bittersweet. In 1963 Darrell Royal had led the Longhorns to an undefeated season and Texas's first National Championship - an achievement they sealed in the Cotton Bowl with a defeat of No. 2 Navy led by Roger Staubach. The Longhorns undertook their 1964 campaign with a No. 1 ranking and dreams of a repeat.

That all came crashing to the ground on Oct. 17 when a failed two point conversion allowed visiting conference rival Arkansas to edge them 14-13 . The Longhorns dropped precipitously in the rankings and out of the national championship picture.

So on New Year’s Day 1965, the Longhorns arrived at Miami Orange Bowl Stadium with a 9-1 record, a No. 3 ranking and a determination to decorate Alabama's national championship punchbowl.

Not only were the stakes high, the audience was huge. In addition to the more than 80,000 in attendance the game was being televised by NBC on prime time - making it the first night bowl game in history and giving it one of the largest television audiences ever for a college football matchup.

Alabama's Sloan started the game since Namath had re-injured his knee in the practices leading up to the bowl game. He was not expected to play.

Texas struck first and struck hard. With 23 seconds left in the first quarter, the Longhorns called for a power sweep and tailback Ernie Koy ripped off a 79-yard touchdown run.

It got worse for the Crimson Tide before they got any better. When Alabama missed a field goal in the second quarter Texas made them pay. Longhorn quarterback James Hudson quickly completed a 69-yard scoring pass to George Sauer to put Texas up 14-0.

Then, with ten minutes left in the half, Bryant had enough and put his star quarterback in. Namath was wearing soccer shoes to ensure his cleats wouldn't catch in the turf and injure his damaged knee even more.

He proceeded to lead the Crimson Tide on a 14-play, 97-yard drive that culminated in a seven-yard toss to halfback Wayne Trimble that put Alabama on the scoreboard at last.

The Longhorns attempted a field goal when their next drive faltered only to see Creed Gilmer burst through and block it. David Ray recovered the ball and made it all of three yards toward the end zone before fumbling. Texas recovered.

On the next play the Crimson Tide succeeded in sacking Hudson for a loss but a holding penalty by the secondary gave the Longhorns the first down on the Alabama 13-yard line. A few plays later Koy ran the ball in from the one and Texas was up 21-7 and the game went into the intermission.

After halftime, Alabama‘s defense seemed to have shaken off its lethargy and stepped up to stymie the Longhorn offense.Over the next 30 minutes of play Texas would only manage four first downs and never made it out of their own territory on any possession.

Digging the Crimson Tide out of the two touchdown hole was on Namath’s shoulders. He responded with 9-play, 63-yard drive that finished with a 20-yard touchdown pass to receiver Ray Perkins.

As the fourth quarter began, Alabama was driving down the field again but this time the Longhorn defense stiffened and they had to settle for a field goal. The score was now 21-17 and the clock was becoming hostile.

Then, suddenly, fate seemed to smile on the Crimson Tide. The Longhorns fumbled the ball giving Alabama possession on their 34-yard-line. A run and two completions gave Alabama a first down at the Texas six-yard-line.

Three times Namath handed the ball off to fullback Steve Bowman and three times the Longhorn defense held. On fourth down, with the ball mere inches from the goal line Namath called for a quarterback sneak.

With 6-3, 204 lb center Gaylon McCollough leading the way, Namath plunged into the pile. Texas left tackle Frank Bedrick and All-American linebacker Tommy Nobis were there to meet them.

McCullough later said he knew it was a touchdown because "he was lying right on top of me and I was in the end zone."

The officials saw it differently and put the ball on the very edge of the goal line and gave Texas possession.

It was the last gasp for the Tide as their next possession ended with an interception and the last petered out with series of incompletions. Texas carried off the win and stymied Alabama's attempt to cap the national championship with a perfect season.

Namath's 255-yards and two touchdowns were enough to name him the game MVP but it was cold comfort in light of the outcome. As Alabama left the field, Namath told his coach that the officials were wrong and that he had scored on the play.

"If you can't jam it in from there without leaving any doubt," Bryant told him. "You don't deserve to win."