Share All sharing options for: Alabama vs Texas: 1982 Cotton Bowl

In the long history of the Alabama and Texas football programs, the two teams have met just eight times on the gridiron. This week Roll Bama Roll is looking back on each of these contests. Today we revisit the most recent game between the two, the 1982 Cotton Bowl in Dallas, Texas. 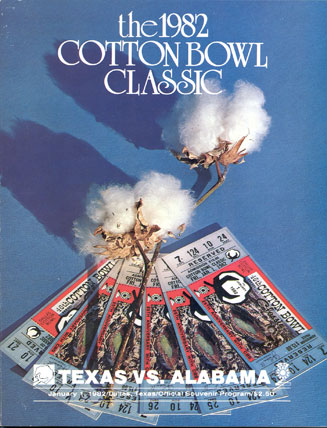 The 1982 Cotton Bowl marked the last time Alabama and Texas faced each other on the football field and was the penultimate post-season game for the Crimson Tide's legendary coach Paul W. Bryant.

After almost a quarter-century in Tuscaloosa and 37 years as a head coach, Bryant's career was in its twilight and his legacy was almost complete. The 1981 season had seen Bryant pass one of the most revered milestones in college football - Amos Alonzo Stagg's 314 career head coaching wins.

On Nov. 14, Bryant tied Stagg's record with an emotional victory against Joe Paterno's Penn State squad in Happy Valley. Two weeks later, at Legion Field in Birmingham, Alabama beat arch-rival Auburn 28-17 and Bryant became the winningest coach in the history of the game.

The pursuit of Stagg's record had drawn unprecedented media attention on Bryant and the team during the season and it left both on unusual down note in its wake. But Alabama had a lot at stake going into the bowl season.

The Crimson Tide shared the SEC Conference championship with Georgia. The Bulldogs - boasting the powerful running attack of Hershel Walker - were ranked No. 2 at the end of the season and tapped for the Sugar Bowl vs Pitt. As the number three team in the nation, Alabama drew the matchup with No. 6 Texas in the Cotton Bowl. 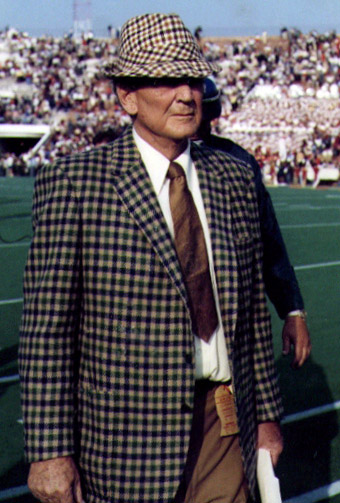 Coach Bryant at the 1982 Cotton Bowl.

A victory in Dallas would give Bryant two of the few achievements that had eluded him in his long career - a win over Texas as coach at Alabama and an NCAA record seven straight bowl wins. And a longshot national championship was also not out of the question either.

The Texans, though, had other plans. When Darrell Royal stepped down following the 1976 season, one of his former assistants, Fred Akers, was selected to fill his place. Although Royal stayed on as athletic director, Akers went to work making his own mark on the program.

Gone was the wishbone and in came the "I" - an offense designed specifically to capitalize on the talents of running back Earl Campbell. An 11-1 record followed the Longhorn record of success rolled on. Texas tallied a respectable 9-3 record the next two seasons but 1980 brought a 7-5 record and a fair bit of grumbling by the faithful.

Akers and his program responded with a rebound in 1981. The Longhorns suffered one tie and one loss during the regular season - although the loss was a doozy, a 42-11 bashing by Lou Holtz's Arkansas squad. The Cotton Bowl marked a chance to finish the campaign on a high note.

Cotton Bowl Stadium was packed on New Year’s Day 1982 with 73,243 people on hand in the 42 degree weather to see the contest. The game began as a defensive struggle as neither offense could much progress for almost a quarter and a half.

Midway through the second period Alabama got the ball on their own 18-yard-line and began working their way down the field. On the seventh play of the drive, quarterback Walter Lewis completed a six yard pass to receiver Jesse Bendross and put the Crimson Tide on the scoreboard. It would be the only score in the first three periods of the contest but the fourth quarter proved to be a roller coaster.

Just more than two-and-a-half minutes into the fourth quarter, Alabama kicker Peter Kim tacked another three points onto the Crimson Tide lead. Then, suddenly, the momentum started swinging the other direction.

Texas return man Jitter Fields took the kickoff 22 yards, all the way to the Texas 40-yard-line. The Alabama defense finally slacked a bit and the Longhorns were able to drive to the Crimson Tide 30-yard-line, the farthest the Texans had managed all afternoon.

A pair of incomplete passes had the Longhorns staring at 3rd & 10. When Texas quarterback Robert Brewer stepped up to take the snap he didn't like the defensive formation he saw across from him and called a timeout.

Akers discarded the planned sprint-out pass and dialed up a quarterback draw - a play Texas had not run the entire season. When Alabama then brought an all-out blitz but the Longhorn line parried it perfectly. Brewer followed his blocks and reeled off a 30-yard run into the end zone. Alabama 10, Texas 7.

On their next possession, Texas kept up the pressure on the Alabama defense. In 10 plays the Longhorns had traversed 72 yards and had the ball on the Crimson Tide eight yard line. Texas fullback Terry Orr punched it in to give the Longhorns the lead. 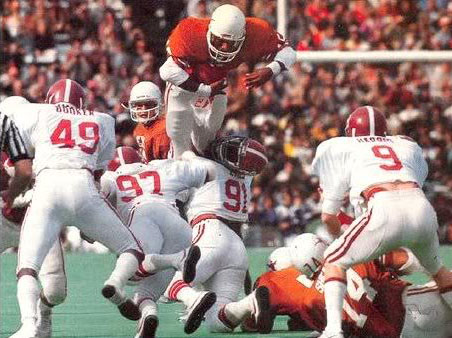 With more than two minutes left in the game, Alabama had plenty of time to put together a scoring drive. The odds got even better when Joey Jones returned the kickoff 61 yards to Texas 38-yard-line - the longest return in Cotton Bowl history.

Lewis threw for the end zone on the first play of the Alabama possession and Texas free safety William Graham reeled it in. The Longhorn was immediately tackled on the one yard line.

Three quarterback sneaks (and a delay of game penalty) made it 4th down on the 2-yard-line with just less than a minute left in the game. Akers then instructed his punter, Josh Goodson, to take the snap and step out of the end zone for an intentional safety.

Alabama got the ball back but with 43 seconds left on the clock and no timeouts, it wasn't able to put any more points on the board. Texas walked away, once again, with a win: 14-12.

Akers later said it was the greatest victory of his coaching career and Bryant gave him full credit for the win and praised the call for the intentional safety. What the Crimson Tide coach didn't put any stock in was the idea there was any jinx at work on Alabama for facing the Longhorns.

"I don’t think there is a Texas whammy on Alabama," he said. "Their players and coaches beat us - not a whammy."

Bryant would go onto coach for one more season. He announced his retirement two weeks before the Liberty Bowl and the 21-15 win over Illinois was his final victory - the 323rd of his head coaching career.

Less than a month later the Bryant passed away of a heart attack at the age of 69.