Share All sharing options for: The 1946 Rose Bowl: Alabama vs USC

Alabama has played in a total of six Rose Bowl games and Roll Bama Roll is looking back at each of those historic football matches. Today we turn our attention to the final time the Crimson Tide appeared in "The Grandaddy of Them All" - the 1946 contest versus USC. 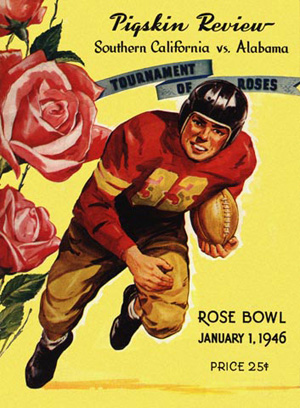 Alabama's final Rose Bowl game in was on New Year's Day, 1946 - a full 20 years since the Crimson Tide's inaugural appearance in the Tournament of Roses invitational football game.

Crimson Tide Head Coach Frank Thomas had led Alabama to a second national championship in 1941 - the fifth in the program's history - but building on that success proved impossible due to World War II. The university dropped the football program in 1943 due to the war.

The next season Thomas struggled to restart the program with a group of returning vets, 4-F students and teenagers too young to draft that he dubbed his "War Babies." The first year produced an unsatisfying 5-2-2 record but Thomas knew he had something special with this group of players. 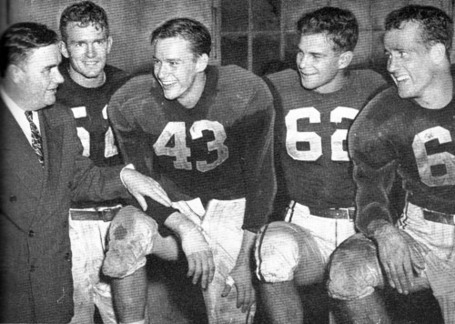 One reason for his optimism was an undersized tailback named Harry Gilmer. With a one-of-a-kind leaping throwing style as accurate as it was unorthodox, Gilmer became the force driving the Crimson Tide offense.

He captivated the Alabama faithful from the start when he opened the 1944 season by returning a LSU kickoff 95 yards for a touchdown. No less than Grantland Rice declared him "the greatest college passer I ever saw."

With the conclusion of WW II in the spring of 1945, Thomas' war babies were joined by a number of returning veterans on campus in the fall. It proved to be one of the strongest squads Thomas ever put on the field.

The Crimson Tide barreled to an undefeated 9-0 season; their closest call being a 28-14 victory over Georgia in Birmingham. Alabama carried the Southeast Conference and earned their sixth invitation to play in the Rose Bowl.

In California, the Trojans of USC were riding high under head coach Newell J. "Jeff" Cravath. A center for powerful "Thundering Herd" squads under the legendary Howard Jones in the 1920s, Cravath was called back to Westwood after a dismal 2-6-1 outing in 1941 under Justin M. "Sam" Barry.

Cravath fielded several strong Trojan squads relying on experienced players from Navy and Marine training programs set up at USC. He also overhauled the USC offense, instituting the "T" formation featuring with four backs, not one, handling the ball.

The Trojans crushed Tennessee 25-0 in the 1945 Rose Bowl, making the eight consecutive win for USC in the New Year's Day classic. The Trojans carried the Pacific Conference crown with a lackluster 7-3 record outscoring their opposition by just 75 points.

Alabama, on the other hand, had amassed a 396-66 point differential during their undefeated season. Going into the game the Crimson Tide was a two-score favorite but that did little to impress the mavens of the West Coast media.

"You've won in the Rose Bowl before," bleated a columnist in the Los Angeles Times. "But you haven’t played Southern Cal yet."

The Rose Bowl boasted a record crowd of 94,000 on a New Year’s Day described as "June in January" weather. Hopes were high for the Trojan's ninth victory by the heavily partisan crowd. 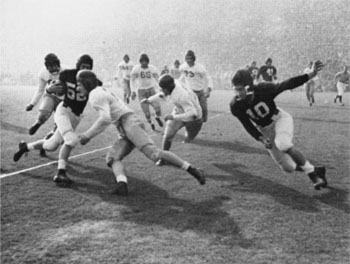 The Trojans had no answer for Alabama's Harry Gilmer.

USC’s fortunes started foul as a fumble the second play of the game was recovered at the Trojan 15-yard line by Alabama’s Jack Green. Four plays later, with the ball on the two foot line, Alabama’s Henry Self kept the ball on a quarterback sneak and plunged into the end zone. A successful point after kick put Alabama ahead 7-0.

Thomas had kept to the ground game in the first period but as the second quarter opened up he let Gilmer take to the air. The result was an 11-play, 68-yard drive which ended with Gilmer plunging over the pile for the final three yards to score. Another kick and the score was 14-0.

As the second quarter began to wind down, Alabama launched another furious drive covering 64 yards in just four plays. Lowell Tew – who started despite a broken jaw – ran it in from the two-yard-line for the touchdown but kicker Hugh Morrow missed the extra point. The score going into the locker room at halftime was Alabama 20, USC 0.

After the intermission Alabama got the ball at the Trojan’s 39 off of a fumble by Verl Lillywhite and needed all of seven plays to find the end zone again. Norwood Hodges took it in from the one to score and with the kick, the Crimson Tide lead stretched to 27-0.

As the fourth quarter started Gilmer completed a 15-yard pass to Self who scooted the final ten yards into the end zone. Alabama now led 34-0 and the Trojan-heavy crowd began heading for the exits. Thomas then took his starters out of the game and let the second and third string squads take over.

Midway through the fourth period, Alabama’s Gordon Pettus fumbled and USC’s Jay Perrin, a 320 lb guard, fell on the ball at the Crimson Tide 25-yard line. A pass from Lillywhite to Harry Adelman put the Trojans on the scoreboard at last. With the extra point, the score was 34-7.

The Trojans got another break moments later when Myron Dornbos broke through the Crimson Tide line and blocked a punt attempt. USC end Chuck Clark picked it up and ran it back for the touchdown. With Lillywhite’s successful kick the score was 34-14 which proved to be the final. 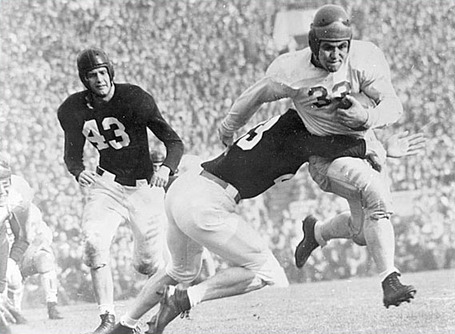 USC only managed six rushing yards in the game.

It wasn’t so much a victory as a complete shellacking. Alabama outgained USC 351 yards to 41 and held the men of Troy’s running offense to an anemic six yards. Alabama collected 18 first downs to the Trojans three. Gilmer garnered the game’s MVP honors with a 16 carry, 113 yard performance.

The next day saw the venerable Los Angeles Times  singing quite a different tune declaring the Alabama squad "a faster, smarter, more eager, better trained and conditioned" team than the hometown Trojans.

The recognized national champion for the 1945 season is Army’s undefeated Black Knights squad but the military service academies eschewed bowl appearances during the war years. Still, the National Championship Foundation elected both Alabama and Army as co-national champions for the season.

The game proved to be an end of an era for Alabama. Thomas’ health had declined precipitously as the 1945 season progressed due to heart and lung disease. He continued to coach the team in 1946 but was confined to bed when not on the practice field. He stepped down as head coach at the end of the season (although staying on as the school’s athletic director) with 115-24-7 record and two national championships.

The 1946 Rose Bowl proved to be the final contest featuring any team outside of the Pacific Coast and Big Ten conferences. The Tournament of Roses struck an exclusive deal to pair the champions of the two conferences in the New Year's Day classic beginning with the 1947 game.