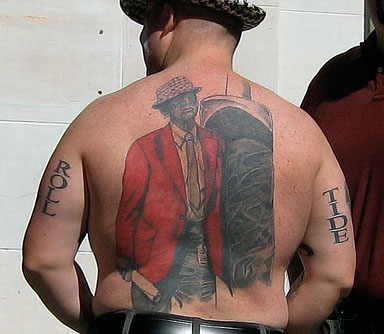 The success of the Crimson Tide's football program and upcoming National Championship game has been a boon for Alabama tattoo parlors. While Tuscaloosa-area tattoo shops say they typically see an increase in demand for Alabama-themed body art during football season, according to WAAY-TV the interest is even greater this year.

"It has increased a lot more since the winning," said Robby Sadler, owner of All The Rage Tattoo in Decatur.

Sadler and other tattoo parlor proprietors really expect body art business to boom in the event Alabama defeats the Longhorns in the BCS title game on Jan.7. In order to be ready, the tattoo artists have been working on designs commemorating the event in advance.

Of course, several Alabama players have tattoos themselves. Defensive back Justin Woodall's whole upper body is pretty much covered in them and he claims they help him focus when he's on the field.

"It’s motivation," he said. "I might look down one or two times and look at it, especially during workouts."

Still, the standard by which all tattooed Alabama fans are judged is "Alabama Super-Fan" Nathan Davis whose full back image of Coach Bryant has become synonymous with die-hard Crimson Tide devotion. But for anyone considering such an epic piece of body art keep in mind, it was a $3,500 investment that took several years to complete.