In the long history of the Alabama and Texas football programs, the two teams have met just eight times on the gridiron. Over the next two weeks Roll Bama Roll will look back on each of these contests. We kick off with the second game between the two on Nov. 13, 1915 in Austin, Texas. 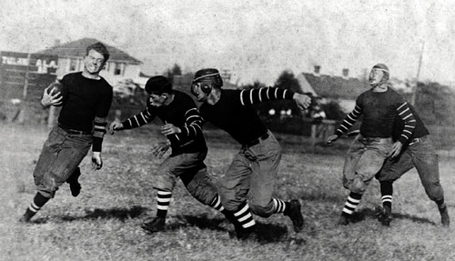 Alabama began 1915 with high hopes under first-year coach Thomas Kelly. A player under Alonzo Stagg at the University of Chicago, Kelly was expected to bring the "open style" of ball played in the Midwest to Tuscaloosa.

He certainly brought something. In the first six games of the season, Alabama - then a member of the Southern Intercollegiate Athletic Association - outscored opponents 190 to 10 and even claimed their first victory over Southern powerhouse Sewanee (The University of the South).

Yet things had taken a turn for the worse in October when Kelly contracted Typhoid fever forcing athletic director Lonnie Noonjin and former Alabama quarterback Farley Moody to take over his duties. It was a tough situation as Alabama began November with a pair of grueling road games.

On Nov. 6, John Heisman's Georgia Tech squad soundly beat Alabama 21-7 before 5,000 fans at Grant Field in Atlanta, Georgia. The weary Alabama players then had to travel more than 800 miles to Austin, Texas to face the Longhorns.

At the time, Texas was coached by was one of the most successful coaches of the early era of Longhorn football, Dave Allerdice. The former Michigan halfback had taken over the team in 1911 at the age of 25 making him the youngest head coach in Texas' history.

Despite his relative youth, Allerdice seemed to know his business. He had gone 19-3 in his first three seasons and his 1915 squad had racked up an impressive season to that point as well. In their first three games the Longhorns had outscored their opponents 223-0, including a UT-record 92-0 victory over Daniel Baker - still the largest margin of victory and points scored in school history.

But a couple of tough losses since then had stiffened the Longhorn's resolve when Alabama arrived at Clark Field in Austin on Nov. 13. According to the Alabama archives, the game was played "on a heavy field in a drizzing rain" limiting the passing attack of both teams.

It turned into a slog with Texas grinding Alabama down "playing straight football by cleverly mixing lines plays with end runs." End Charlie Turner and flanker Bert Walker both scored with plunges through the line but the third Longhorn touchdown came when quarterback (and all-American track standout) Clyde Littlefield ran 53 yards to the end zone, dodging no less than seven Alabama tacklers on the way.

The multi-talented W.T. "Bully" Van de Graaff - who would go on to be Alabama's first All-American - was the team's best hope for scoring in his role as kicker. But missed no less than three field goals - the last of which was a 55-yard effort that bounced off one of the uprights near the top. The Longhorns won 20-0.

Despite the loss, the game was a landmark for Alabama since it was the first time the team had traveled outside the southeast to play an opponent. It was the first step in Alabama president George Denny's plan to use the sport to increase the profile of the university.

Alabama returned home and laid a 53-0 beatdown on Mississippi the next week. They finished the season 6-2.

Texas finished with a 6-3 record. It was also the Longhorn's first year in the Southwest Conference and they finshed with a 2-2 record and tying for third. Despite that, Coach Allerdice resigned citing the "super critical nature of the Texas fans." He left Austin with a 33-7 record.