Birmingham artist Bonard Hughins (via alias Baxter Wahl) currently has a show up at Rojo on Highland Avenue that includes one Alabama football related piece titled The Reason Alabama Lost the First Iron Bowl. The rest of the series, like this piece, takes actual events, people and places around Highland Avenue in Birmingham history and puts a different spin on them. The series is called "The Highland Ave. Mystery Mini-Series." While I'm amused by this one as a football fan, it's actually one of my least favorite in the series. I particularly like the one about the Five Points fountain and the Highland Golf Course one. He also takes a shot at the current city government in one of the pieces as well.

I think anybody from Birmingham and especially those familiar with Southside will recognize just about everyone and every place in the series. Very cool drawings. You can go see them in person at Rojo or see the ones Hughins has put up on his Flickr photostream (where you can view the drawings much larger): 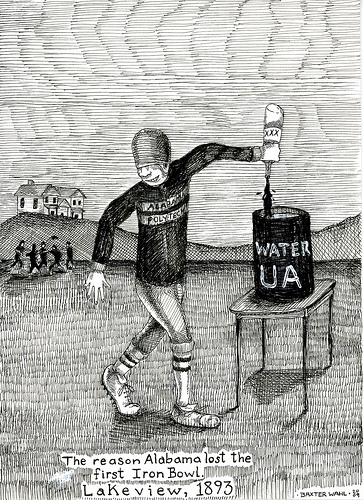