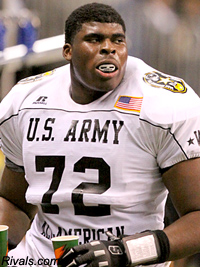 If you're a good football coach, which Nick Saban most assuredly is, you don't consider the prospect of losing an All-American at Left Tackle without doing everything in your power to find someone just as good (if not better) to, at least eventually, fill his shoes. Fluker, with his rare blend of size and athleticism, has the makings of a future All-American at that position, and thank God for it. A Katrina refugee who's story made the newspaper rounds in the days leading up to National Signing Day, Fluker made his name as a star defensive lineman in Mobile before switching to offense his senior season at Foley High school. Despite only playing one year at LT in high school, he quickly emerged as a top lineman (#1 OL on Rivals) and eventually one of the top prospects (#3 overall player on Rivals) after his stellar performances in various All-Star games. With attrition on the line at key spots like LT, C, and RG, and not a whole lot of stand out options to plug them, we simply had to have someone like Fluker.

According to Rivals analyst Barry Every, he "would have to decide he didn't want to play, just decided 'I don't like it,' to not be great." That's pretty high praise, and it doesn't end there. You simply cannot find an account of anyone asked about Fluker's potential who had a negative comment about his abilities. Mountain Brook High School coach Chris Yeager, who coached Fluker at the Alabama-Mississippi All-Star Classic (and who, it should be noted, also coached Andre Smith and 5 Star Signee Tyler Love) raves about him (emphasis mine), saying "I think his biggest asset is he's so light on his feet. He's got the feet of a boxer, and his first punch for his size is so quick. I don't know if I've ever seen one like that." Essentially the only question concerning Fluker's playing time is where and when, not if, and the where (LT) is pretty much a foregone conclusion. So the question of "when" is really only dependent on two things: Can he pick up the scheme quickly enough in fall camp to earn his way onto the field and can anyone else so significantly distance themselves from the pack during the spring that Fluker couldn't overtake them no matter how good he is?

As far as his ability to pick up the scheme goes, according to ESPN analyst Tom Luginbill, "he has every bit the ability, the size, the strength and the penchant for finishing plays that Andre Smith had." Smith earned the starting job the moment he set foot on campus, as I'm sure you all will remember, and if Fluker is as good as everyone claims then knowing the scheme inside out or not may not matter, he could just be simply too good not to play. Of course, we still need to take a look at the second question; Is there anyone on the roster that could easily stake a claim to the LT spot and hold onto it before Fluker can get on campus? Possibly. Joe Pendry is the type that is going to put his best five guys on the field, even if they are out of position (see vs Tulane and the Sugar Bowl, if you can stomach it). Believe it or not, Alabama has managed to stockpile some considerable talent on the OL over the last few years, though it hasn't necessarily shown in their performance. The signing class that brought Andre Smith to Tuscaloosa (Shula's last) was rated as the #1 OL signing class in the nation, while last year's group included a five star and two four star linemen that have now been in the system for a year. Tyler Love, a five star OT coming out of high school, could stake his claim with a solid spring performance, though both John Michael Boswell and Barrett Jones, his fellow 2008 signees, will likely end up at different positions.

Interestingly, Scout is the only service that isn't terribly high on Fluker, giving him a four star rating and thinking he has some work to do: "A massive lineman, Fluker can overpower virtually anyone he comes in contact with. He needs to improve his footwork, quickness and technique, but with his frame and strength, he can be an asset to anyone's running game."

Meanwile ESPN:, which owns Scout, has him ranked as their top OT prospect in the nation, #12 on the ESPNU 150, and thinks he'll make a hell of a tackle:

"Where he really wows you is when he gets moving around. He can stay with blocks and cut-off on the backside. It can be tough to maintain leverage with his size, but he displays the ability to get low and deliver a good initial pop. He is a solid pass blocker with the feet to get back and in front of the rusher. He has good mirroring skills, but is at his best when he can get his hands on a rusher and just lock him down. He has all the raw tools to be an excellent college offensive tackle and looks to be quickly taking to the position. Ultimately, his college position likely will depend on the needs of the program he chooses, but his best upside is clearly at offensive tackle and his play there is increasing his stock."

Rivals is the most keen on Fluker, rating him the #1 OL in the nation and the #3 overall player, while also giving him a 6.1, their highest ranking, meaning "Franchise Player; considered one of the elite prospects in the country, generally among the nation's top 25 players overall; deemed to have excellent pro potential; high-major prospect"

Besides the amusing dance off before the Army All-Star game, there's this snippet showing off his mobility:

And finally the surreal brilliance of whatever this is: