Spa...er...Vulcan is the Place: Sun Ra Tribute at Collective Perspectives...

Share All sharing options for: Spa...er...Vulcan is the Place: Sun Ra Tribute at Collective Perspectives...

UPDATE: I am, as the French might say, le dumb. If you visited their website, you probably noticed that I was a few days off. Collective Perspectives is on THURSDAY, not Tuesday, as my addled brain thought. Oopers. Still come, though. 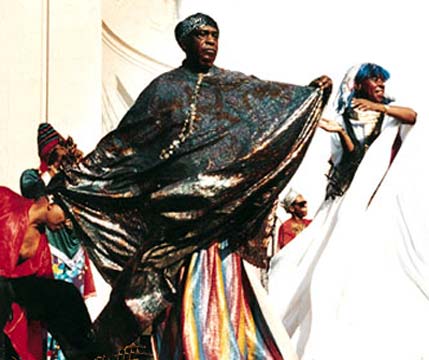 ...or, on this episode of shilling for THE MAN.

For the musically adventurous among us, tomorrow THURSDAY night Vulcan Park and Museum's "Collective Perspectives" will feature a tribute to Birmingham native Sun Ra:

Born in 1912, Sun Ra was a pianist, Afro-futurist philosopher, poet, performance artist and one of the most innovative band leaders in the history of jazz. Sun Ra started his musical journey as Herman Blount, training at the Industrial High School under the great Fess Whatley. As Sun Ra, he drew from many sources – the psychedelic movement, mysticism, bebop, and black liberation philosophies – yet Sun Ra is considered one of the most original musicians ever to perform. Funk musician George Clinton said of the legendary performer: "Yeah, Sun Ra is out to lunch – the same place I eat at."

5:30 – 6:30 p.m. Listen to the music of Sun Ra come to life by the Birmingham Seven, a septet made up of the city’s most sought-after jazz musicians. Led by saxophonist Daniel Western, the Birmingham Seven will perform brand-new transcriptions of numbers featured on Sun Ra’s classic album Magic City and other recordings by the man from Saturn.