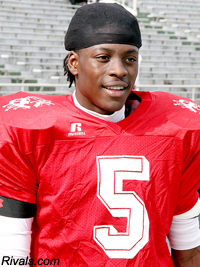 This is actually a pretty interesting topic in Kirkpatrick's case since Alabama didn't really go after a lot of DBs in this class but, as anyone who saw the secondary torched time and again on 3rd and long against both Florida and Utah, there is a need for some upgrades at that position. Losing Gerald West (who had committed to Alabama) to Southern Miss and Darren Myles (who we thought was going to commit to Alabama) to Tennessee didn't help matters, but after the smoke cleared on NSD Kirkpatrick and Rod Woodson stood as the lone DBs in the 2009 signing class. Only going after four to begin with, though, is still a little mystifying, and I have to believe that the staff was suitably pleased with the progress of the '08 DB signees to only seriously pursue the big time targets, of which Kirkpatrick is certainly the biggest. Of course, that could have proven a seriously poor gamble since his family actively encouraged him to (and up until signing day expected he would) head to Texas, but thankfully the chips fell our way and Kirkpatrick will be wearing Crimson and White next season.

Right away? Possibly. As mentioned, the fact that the coaching staff didn't pursue a lot of DBs in this year's class should indicate that they are satisfied with the progress of last year's signees and didn't see the need to take on any prospect that wasn't a "must have." The secondary's only loss from last season is safety Rashad Johnson, who's shoes will be quite difficult to fill, but since Kirkpatrick is a born corner there's little possibility he would wind up there. Looking at the corners left on the roster, Kareem Jackson and Javier Arenas should be secure in their starting jobs. Jackson has shown he's the best cover corner on the roster over the last two seasons, and Arenas is rarely out of position and can play the kind of physical press coverage a Saban CB is routinely called on to play with much taller receivers. Further, he's a huge asset at Star (nickelback), where he has a real knack for reading formations and jumping routes like a true rover. The problem is, when he's at Star, there really isn't a solid option to step in for him at CB. Marquis Johnson did an admirable job all season long, but he's a liability against taller and/or faster receivers downfield, and someone is going to have to fill that void when the defense trots out the extra DBs on passing downs. Alonzo Lawrence, Robby Green, Robert Lester, Mark Barron and BJ Scott (who got a few snaps at WR this season but has been supposedly destined for the secondary every since he faxed in his LOI) were all thought to be the next great Saban DBs out of last year's class, but only Barron was able to gain any significant playing time, and that was at safety. If Lawrence, Lester, or Green (all of whom were only 4 star recruits, though Rivals did rate each as All-American Candidates) can lock down the start in the spring after a year in the system, they could easily hold off Kirkpatrick, or at the very least relegate him to a red shirt season, or possibly a snap here and there in junk time. If he comes in and picks up the defense right away, though, he's got just as good a chance as any of them.

"A corner with the size of a safety, Kirkpatrick is as advertised from a physical standpoint. He is very long and does not get beat on jump balls. Is a momentum player, so success early is good. Needs to be more physical at the LOS, especially when matching up with bigger, more physical receivers. As dangerous with the ball as anybody, he could actually star on either side of the ball."

Meanwile ESPN: has him ranked as their top CB prospect in the nation and #4 on the ESPNU 150, and thinks he does just fine at the LOS, thank you very much:

"Uses his long arms to effectively jam and slow receivers off the line in press coverage, and flashes great recovery speed. Has excellent physical skills and a strong understanding of zone concepts. Covers a lot of ground, expertly reads quarterbacks, matches patterns, innately anticipates throws and flashes great burst to undercut and jump routes. Excels at using his long frame and athleticism to separate the ball from the receiver. Tracks the deep throw well, showing a second gear to break under the ball."

They also gave him a scout grade of 92, making him a "rare prospect."

Rivals also rates him their #1 CB in the country and 11th best overall prospect while giving him a 6.1, their highest grade, meaning "Franchise Player; considered one of the elite prospects in the country, generally among the nation's top 25 players overall; deemed to have excellent pro potential; high-major prospect."

A couple of grainy highlight reels:

And of course the most drawn out hat trick yet, with an uncomfortable intro by Tomma Tubaveel: