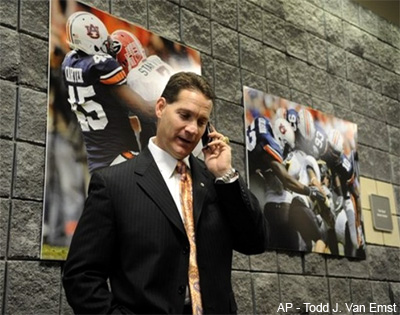 If there was any doubt that Alabama’s second top-ranked recruiting class has put a sense of urgency in the efforts of our in-state rival it was put to rest this week. During a battery of one-on-one meetings with reporters on Monday, Chizik and his staff hammered home the team’s commitment to recruiting.

"We need the No. 1 recruiting class in the country,” said recruiting coordinator Curtis Luper to the Huntsville Times. “That's what I want. That's my goal."

According to Luper, the Barners have designated no less than seven recruiters – and Chizik himself, of course - to work Alabama high schools. That is in contrast to the three Tubberville had working the state during his tenure. According to The Birmingham News their breakdown in the state will be:

After that, there will be five coaches working Georgia and four on the beat in Florida. (although most will have multiple assignments, of course) To do all this Chizik added a number of new coaches to his staff this week that should finalize the Barner coaching lineup.

Meanwhile, a story in today’s Tuscaloosa News indicates that Alabama’s tack will be an increased selectivity toward in-state recruits for the class of 2010 in order to fill specific needs in the lineup. Efforts out-of-state, particularly in Georgia and Tennessee, will then bolster the strength of the next recruiting class.