Wednesday Conjecture: Is CB the Best Place for Javier Arenas?

Share All sharing options for: Wednesday Conjecture: Is CB the Best Place for Javier Arenas? 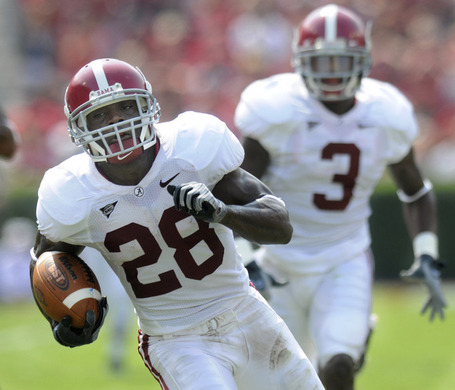 Let me preface this by saying no, I never played or coached football and am speaking purely as an observer. I'm not pretending to have any sort of insight into the relative abilities of these players and this is nothing more than pure conjecture on my part, one of the many random thoughts that passes through my brain each and every day when I get bored. And yes, sadly, that does mean most days I'm walking around thinking about such mundane minutiae as potential roster moves and who will be getting playing time roughly 8 months from now. Anyway, after finishing the Dre Kirkpatrick post Monday night, I started thinking about who would best replace Rashad Johnson, and the thought occured to me that Javier Arenas might be the most logical fit at FS. Hear me out: both Mark Barron and Ali Sharrief saw time at safety last year, but is either one capable of filling Johnson's shoes? Barron fits better at strong safety behind Justin Woodall (both are big, physical players that can play near the line), while Sharrief played behind Johnson and fits better playing middle field like Johnson (only 5'9", but speedy enough to cover a lot of ground over the top). Javy is an equally diminutive 5'9" while Kareem Jackson is only 5'11", but both have played well above their height so far and that's a testament to Saban's (who's kinda short himself, remember) skill at coaching DBs. Of course, being short at CB is typically a liability when covering the increasingly tall wide receivers in the SEC, and if you look at the DBs that were signed in the last two classes, all of the recruits that project as CBs are at least 6'0", with most of them reaching 6'2". Do you see where I'm going with this? Saban wants better height in his corners, but so far he hasn't had any to work with. Now that he does, though, and considering we desperately need someone that can cover taller receivers downfield besides Jackson and Arenas, do you think it's a safe bet that a couple of the VHTs from last year's group (and maybe Kirkpatrick?) will be vying for some serious playing time this season? Yeah, me too, but what does that mean for Arenas? If we're trying to get taller corners on the field, Arenas certainly doesn't fit the bill, but his height was rarely an obstacle while sliding over to Star, where his primary role was to play rover underneath and cover the intermediate routes. He was damn good at it, too, recognizing formations and jumping routes as well as Simeon Castille ever did, but with the recovery speed to play aggressively without being burned. In other words, move him about ten yards deeper and he makes a heck of a free safety. If one of the young guys can show enough to earn a spot at CB, then why not move Arenas over? He has far more game experience than Sharrief, any one of the VHTs that might prove themselves over the spring (or even Barron, who did see some time at Star as well) could easily take over as the nickelback, and playing at FS, where he'd be essentially covering the whole field, instead of CB, where's he's locked onto either one man or a specific zone, would give Arenas more opportunity to get his hands on the ball and make something happen. Just a thought.