How to Get Coach Saban's Autograph

Share All sharing options for: How to Get Coach Saban's Autograph 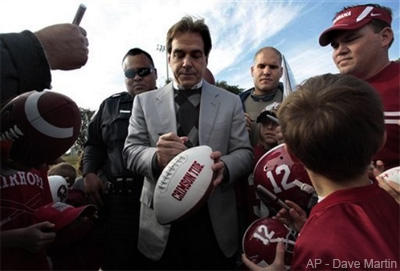 Something that has been mentioned a few times around here is the policy Coach Saban has for signing items sent to him at certain times of the year. I spoke with the folks in the football office today and the latest two-week window to do this opens next Monday.

According to the Football Office, items may be sent to Coach Saban for autographing between Feb. 23 and March 6. There are also times slated in late July and late November but those are subject to change. The limit is two items and they must come with a postage-paid self-addressed envelope (or box if necessary) as well as indicating the name of the person for the signature to be made to.