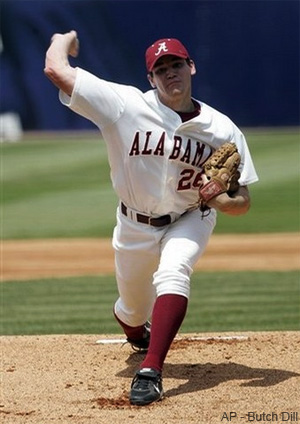 Alabama baseball launches its '09 season today with the first of a three game series vs the Southeast Missouri State Redhawks at Sewell-Thomas Stadium.

After surprising the pundits last year by reaching the NCAA tournament, this year’s team starts out ranked 21st in the nation and boasts no less than three pre-season all Americans, Brandon May, Josh Rutledge and Ross Wilson. Coach Jim Wells – already the winningest coach in Tide baseball history – is launching his 15th season just a dozen wins shy of 600 victories.

It looks to be an exciting season. The SEC is downright brutal this year with five teams ranked in Baseball America’s pre-season top 25. Our western division rival LSU is ranked No. 2 and the coaches favorite to win it all.

But this Crimson Tide team has been very clear of it's goal from the start - Omaha.