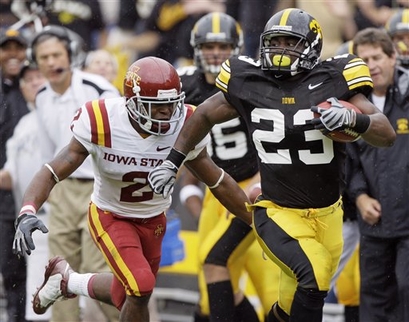 As a quick refresher to those of you who have forgotten how this works (or to those who have never heard of "Running Back Success Rate" before), we judge each run on it's "success" as opposed to yardage gained to get a more accurate picture of how good a running back really is. For a run to be deemed "successful," it must gain at least 40% of the yardage needed to move the chains on 1st down, 60% on 2nd down, and 100% on 3rd and 4th down. This type of metric ignores big run outliers that can skew others like yards per carry averages and simple total yardage figures. Fittingly, we have the poster child for why this is a handy metric to start things off. Shonn Greene finished the year with 1850 total yards and a very solid 6.0 ypc average, yet when we look at his success rate numbers he only comes out with only a 57% rate (excel spreadsheet, 43kb).

There are a couple of interesting things we can take from his numbers:

Putting all of this together, we can get a picture of a boom or bust type of back.  Obviously you want a back  that can bust off big, game changing runs, but if you're going to be a feature back like Greene was for Iowa, breaking the big runs on 1st down while failing to consistently move the chains on 3rd and short isn't really what you want.

*note: I've worked this stuff up for a handful of top non-SEC backs, but mostly we'll be comparing backs in our own league.  just an fyi.